Myrkl: new anti-hangover pill said to break down up to 70% of alcohol in an hour – what you need to know

It isn’t easy being a professional athlete. Not only are the physical demands greater than most people could handle, athletes also face intense psychological pressure during competition.

This is something 18-year-old British tennis player Emma Raducanu wrote about on social media following her retirement from Wimbledon. Though the young player had been doing well in the tournament, she began having difficulty regulating her breathing and heart rate during a match, which she later chalked up to “the accumulation of the excitement and the buzz.”

She isn’t the first athlete to experience the physical effects of stress, with English footballer Marcus Rashford revealing he’d also had a similar experience in the past.

There are many reasons why stress can cause such powerful bodily reactions. But with training, this response can be changed so that a person reacts positively under pressure.

Performance stress is almost unavoidable. But there are many different factors that dictate just how our minds and bodies respond to stressful events.

Typically, stress is the result of an exchange between two factors: demands and resources. A person might feel stressed about an event if they feel the demands on them are greater than they can handle. So for an athlete, demands include the high level of physical and mental effort required to succeed, their levels of uncertainty about the event or their chance of succeeding, and any potential dangers to their health (such as injury) or their self-esteem.

Resources, on the other hand, are a person’s ability to cope with these demands. These include factors such as confidence levels, how much control they believe they have over the situation’s outcome, and whether they’re looking forward to the event or not.

Each new demand or change in circumstances affects whether a person responds positively or negatively to stress. Typically the more resources a person feels they have in handling the situation, the more positive their stress response. This positive stress response is known as a challenge state.

So in Raducanu’s case, a much larger audience, higher expectations and facing a more skillful opponent, may all have led her to feel there were greater demands being placed on her – but she didn’t have the resources to tackle them. This led to her experiencing a threat response.

Our challenge and threat responses essentially influence how our body responds to stressful situations, as both affect the production of adrenaline and cortisol (also known as “stress hormones”).

During a challenge state, adrenaline increases the amount of blood pumped from the heart and expands the blood vessels. This is good for the body, as adrenaline allows more energy to be delivered to the muscles and brain. This increase of blood and decrease of pressure in the blood vessels has been consistently related to superior sport performance in everything from cricket batting, golf putting and penalty taking. 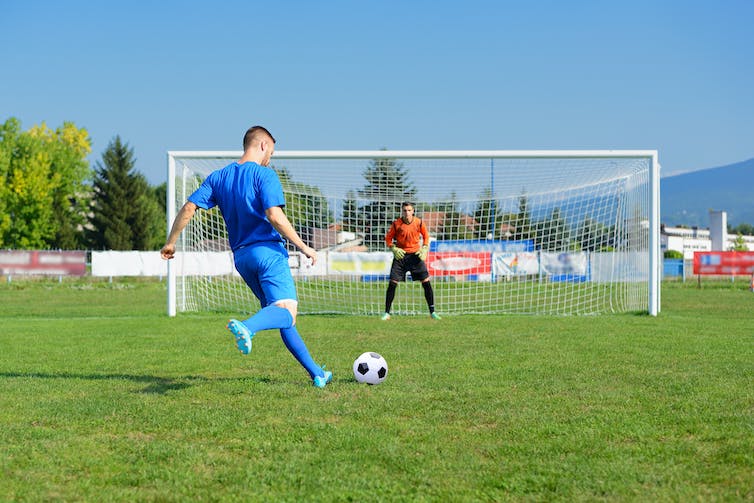 In tennis players, higher levels of cortisol have been associated with more unsuccessful serves, and greater levels of anxiety.

That said, anxiety is also a common experience for athletes when they’re under pressure. Anxiety can increase heart rate and perspiration, cause heart palpitations, muscle tremors and shortness of breath, as well as headaches, nausea, stomach pain, weakness and a desire to escape in more severe cases. Anxiety can also reduce concentration and self-control (such as being able to stay calm), and cause overthinking.

How intensely a person experiences anxiety depends on the demands and resources they have. Anxiety may also manifest itself in the form of excitement or nervousness depending on the stress response.

Negative stress responses can be harmful to both physical and mental health – and repeated responses can increase risk of heart disease and depression.

But there are many ways athletes can ensure they respond positively under pressure. Positive stress responses can be promoted by encouraging feelings of confidence and control through the language we and others (such as coaches or parents) use. Psychologists can also help athletes change how they see their physiological responses – such as helping them see a higher heart rate as excitement, rather than nerves.

Psychological skills – such as visualisation – can also help decrease our physiological responses to threat. This may involve creating a mental picture of a time when the athlete performed well, or picturing themselves doing well in the future. This can help create feelings of confidence and control over the stressful event.

Recreating competitive pressure during training can also help athletes learn how to cope with stress. An example of this might be scoring athletes against their peers to create a sense of competition. This would increase the demands players experience compared to a normal training session, while still allowing them to practice coping with stress.

It is therefore possible to learn to have a better reaction to stressful situations. Learning this skill may be just one of the many reasons athletes are able to perform many of the feats they do.

Andrew Wilkinson does not work for, consult, own shares in or receive funding from any company or organisation that would benefit from this article, and has disclosed no relevant affiliations beyond their academic appointment.