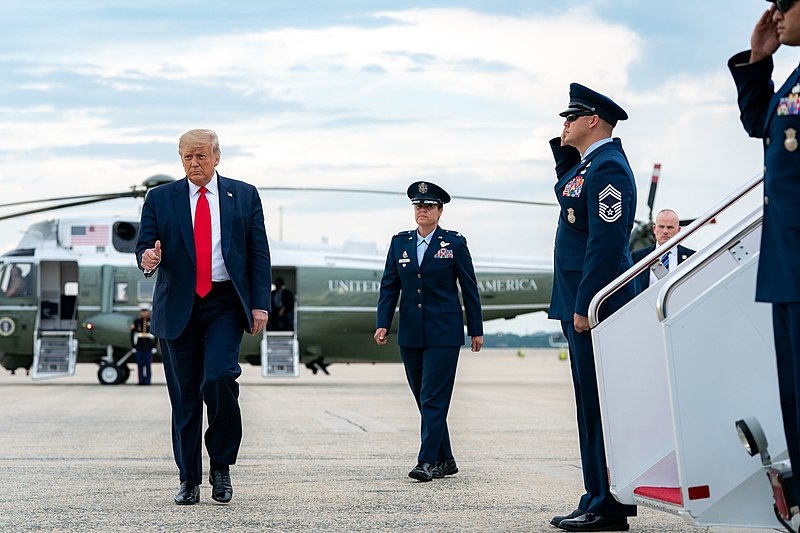 A few weeks ago, prominent civil rights icon and Congressman John Lewis passed away after battling pancreatic cancer at 80 years old. As Lewis’ body arrives at the Capitol for fellow lawmakers and politicians to pay respects, Donald Trump has said he will not be visiting the late congressman’s lying-in-state.

The Daily Mail reports that prior to leaving for North Carolina, Trump told journalists he would not be visiting Lewis’ lying-in-state in the Dome in the Capitol. Trump left Washington around the same time as Lewis’ body arrived at the Capitol, where lawmakers can stop by and honor his legacy. Vice President Mike Pence and Second Lady Karen Pence will be visiting Monday night.

Former vice president and presumptive Democratic nominee Joe Biden and former second lady Dr. Jill Biden will also be stopping by to pay their respects to their former colleague. Lewis was honored with a ceremony at the Capitol rotunda, visited by lawmakers both Republican and Democrat, and is the second African American since Rosa Parks, to be given that honor.

Lewis’ death comes at a time of a pandemic coupled with civil unrest within the United States due to the underlying racial tensions that have since resurfaced. The death of George Floyd back in May sparked several protests all over the country and all over the world and Trump has been accused of fueling the tensions.

Trump sent in military troops to disperse the protests, which at one point turned violent. Lewis has since criticized him for it, saying that the protests cannot be stopped especially at a time where there has been so much progress.

Meanwhile, as coronavirus cases in the country continue rising as well as its death toll, another official in the White House has tested positive for COVID-19. Trump’s National Security Adviser Robert O’Brien tested positive for the virus. According to a statement from the White House, O’Brien has been self-isolating since experiencing mild symptoms, working remotely for the meantime. The White House also insisted that there was no risk of Trump getting exposed to the virus despite O’Brien’s position as a national security adviser requiring him to work closely with the president.

Anonymous sources have since given conflicting reports about how O’Brien tested positive. One report stated that O’Brien contracted the virus following his attendance at a family event, while another said that he recently traveled to Europe with several staff members and did not practice social distancing nor wear a face mask in public.