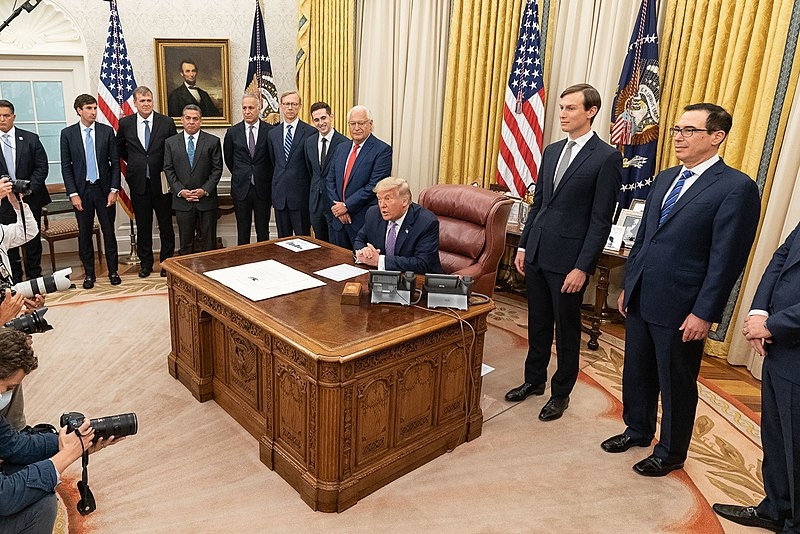 CNN reports that speaking to the reporters who were present at the White House, Trump revealed that he was in a conference call with the leaders from both countries, Israel Prime Minister Benjamin Netanyahu and UAE crown prince Mohammed bin Zayed. Trump also revealed that during the call, both leaders have reached a peace agreement, which will also see Israel temporarily suspend its plans to fully take control of the West Bank.

“This is a significant step towards building a more peaceful, secure, and prosperous Middle East,” said Trump. The president also hinted that other countries are going to do the same as the UAE.

The deal would be known as the Abraham Accord, named after the “father of all three great faiths; Christian, Muslim, and Jewish,” said David Friedman, the US Ambassador to Israel.

“The Palestinian leadership rejects what the United Arab Emirates has done and considers it a betrayal of Jerusalem, the Al-Aqsa mosque, and the Palestinian cause. This deal is a de facto recognition of Jerusalem as the capital of Israel,” said Abbas’ spokesman Nabil Adu Reideneh.

The US continues to face an uphill battle against COVID-19 yet Trump is still very keen on reopening the country even as the death toll in the US from the pandemic has exceeded 166,000 people dead. Trump insisted that businesses, as well as schools, must fully reopen and has even threatened to withhold federal funding if schools choose to push through with remote or online classes instead in the fall.

Trump reasoned that children only suffer from mild symptoms of COVID-19 with a very rare chance of also suffering from complications. Contrary to Trump’s claim, a study made by the Centers for Disease Control found that younger people may still be suffering from the virus for several weeks, even in young adults who do not have existing conditions.