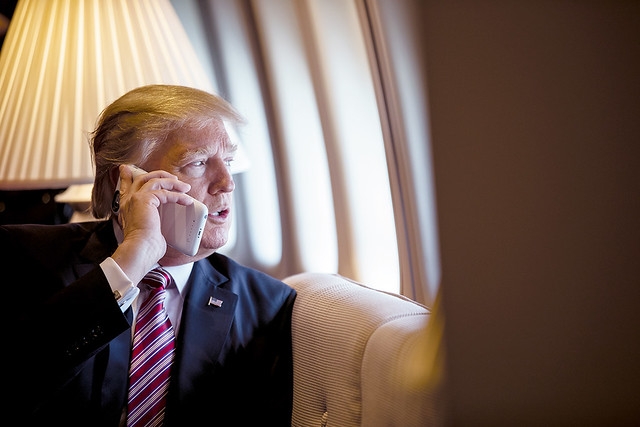 U.S. President Donald Trump talks on the phone aboard Air Force One during a flight to Philadelphia, Pennsylvania on January 26, 2017. | Photo by Shealah Craighead/White House (Public Domain) via Flickr.com

When Donald Trump officially became the United States President, his indifference with former Federal Bureau of Investigation director James Comey was also made known very well. This week, the word war between the two started yet again.

It might have started after Comey’s TV interview with CNN where news anchor Anderson Cooper asked if he thinks Russia has a “leverage” on Trump. He visibly hesitated to give a direct answer at first. But when asked whether or not he thinks it is possible, he responded with an affirmative answer.

As expected, Trump would not let Comey’s latest comments slide. Late on Thursday evening, the 45th President of the U.S. said on Twitter, “James Comey is a disgrace to the FBI & will go down as the worst Director in its long and once proud history. He brought the FBI down, almost all Republicans & Democrats thought he should be FIRED, but the FBI will regain greatness because of the great men & women who work there!”

Trump dismissed Comey’s tenure as FBI director on May 9, 2017, that was about six years early before the latter could finish a regular 10-year term. There were earlier reports that he was fired because of his approach in the Hillary Clinton investigations. A couple of days later, however, Trump told NBC News that he decisively ended Comey’s career regardless of what the latter’s superiors, Jeff Sessions and Rod Rosenstein, recommendations would have been.

Since Trump got elected, his presidency has been mired with accusations that people in his campaign team allegedly conspired with Russia. It was believed to have resulted to a state-sponsored interference on the 2016 U.S. Presidential election. It led to an investigation led by special counsel Robert Mueller in 2016 that concluded earlier this year where no one was found criminally liable of conspiracy.

However, for Comey, the findings stated in the Mueller report should have been enough to indict Trump. The only thing that is purportedly shielding him now is his presidency. “There are a whole lot of facts in Bob Mueller’s report that raises serious questions about whether there’s a chargeable case for obstruction and witness tampering against this president,” Comey also told CNN.