U.S. trade deficit narrows in June on rise in exports, data likely to be better in August 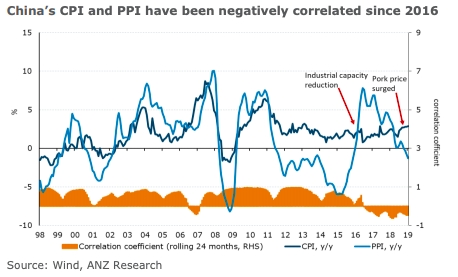 The consumer price index (CPI) and the producer price index (PPI) are both important indicators of changes in prices and underlying inflation over time. Since 2016, China’s CPI and PPI have been negatively correlated since 2016. Indeed, the divergence between China’s CPI and PPI has widened to 4.2ppt y/y in September, according to the latest report from ANZ Research.

The divergence stems from China’s supply-side reforms, notably capacity reduction and property tightening, put in place since 2016. As a result, the prices in some sectors have soared due to reduced supply, but the prices at downstream sectors have remained relatively stable.

China does not have a single inflation gauge, so its monetary policy does not practise inflation targeting. The current policy preference is to implement measures specific to certain economic segments rather than broad-based easing. The magnitude of any cut in the benchmark interest rate will thus be relatively limited compared with other central banks.

When China was still largely an investment-driven economy prior to 2015, its CPI and PPI were positively correlated most of the time, with a coefficient as high as 0.69 during 1998-2015. However, the correlation turned negative after 2016.

Since PPI often represents the prices of upstream sectors of the economy while CPI represents downstream prices, a negative correlation indicates that there is a lack of transmission from one part of the supply chain to another.

Macroeconomic theory suggest that the price of any given product is determined by the intersection of aggregate demand and supply. Since the supply side is inelastic in reality, inflation is easily pulled up by demand side factors.

The theory captured inflationary trends in China’s economy prior to 2015, when property investment was the key driver of aggregate demand. Consequently, CPI and PPI shared the same trend.

However, both CPI and PPI have become more influenced by supply-side rather than demand-side factors since 2016, following President Xi Jinping’s call for structural reforms. One example is the PPI spike in 2016-2017 due to production capacity curbs, the report added.

Another example of a supply-side driven inflationary phenomenon is the recent surge in pork prices, which consequently boosted the CPI but not the PPI.

"We believe the focus of China’s monetary policy will tilt towards managing the risks of an industrial recession. In our view, the PPI serves a reliable gauge of China’s business cycle. The central bank will rather pledge more support to small-and-medium enterprises (SME) and other segments that would have a larger impact on jobs and employment. Therefore, targeted cuts in the reserve requirement ratio (RRR) and targeted medium term lending facility (MLF) will still be the preferred tools. A reduction in the market benchmark rate, if happens, will be in a limited magnitude," ANZ Research further commented in the report.