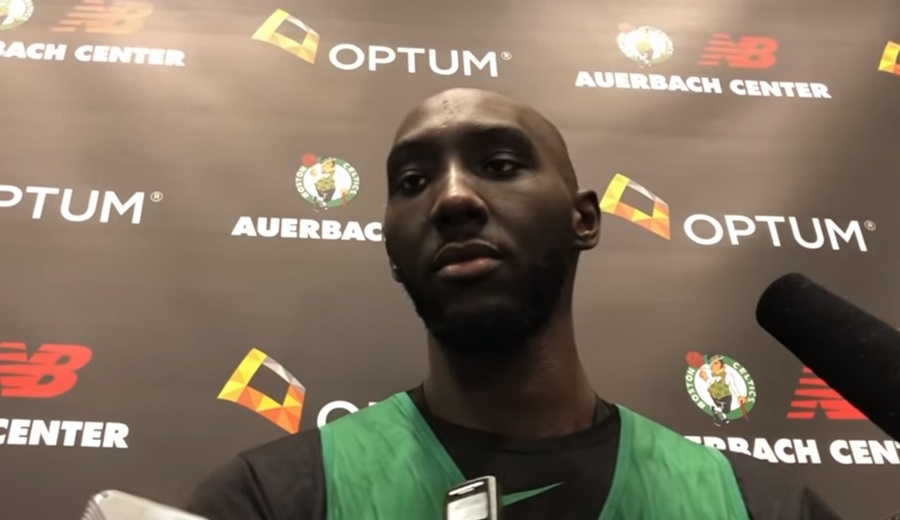 Photo via Screenshot of CLNS Media/Youtube

The Boston Celtics now have a new core that’s been added to its roster who’s expected to be the new leader of the team. Being no stranger to the spotlight, Kemba Walker’s new journey with The Green officially started on Wednesday, taking on the load left behind by Kyrie Irving and Al Horford.

The good news for Walker is that he isn’t facing the same high expectations that were placed on Irving and Horford when both players joined the Boston Celtics. But this isn’t to say that fans and analysts alike aren’t paying attention.

It’s the opposite, in fact. This isn’t surprising since the Boston Celtics are boasting 17 banners on its rafters. Even if Walker was the face of the Hornets for almost a decade, leading the Celtics will be a different task altogether.

Boston Celtics might be adding Tacko Fall into the roster

Fortunately, he won’t be doing it alone as the Boston Celtics still have several stars on its roster. Jayson Tatum, Gordon Hayward, Jaylen Brown, and Enes Canter are all there to ensure that the team will make an appearance on the 2018-2019 Playoffs.

But the Boston Celtics also has an ace up its sleeve: Tacko Fall. Standing at a jaw-dropping 7’5, Fall is currently in a position to make the team’s roster as hinted by Celtics general manager Danny Ainge. Ainge and the rest of the Celtics staff were impressed at Fall’s performance during the Summer League, highlighting the 23-year-old’s ridiculous height and how it opens up new plays for the team.

Tacko Fall could open up unique plays for the Boston Celtics

“I mean, guards get in a bind and they just throw the ball up in the air and then Tacko grabs them and tip-toe dunks them into the basket. It just looks like it's a senior in high school playing against fourth-graders sometimes out there,” Ainge said. The Boston Celtics currently have an open spot in its roster after the team parted ways with forward Guerschon Yabusele.

Tacko could very well fill that void, and it would be interesting to see what sort of plays coach Brad Stevens comes up for him. So despite the Boston Celtics taking a huge blow in losing Horford and Irving, the team still has a potent lineup that will likely be enough to push them through the Playoffs. But appearing in the Playoffs and winning it are two different things. With the current NBA landscape having multiple teams that have amazing duos, Walker and the Celtics are going to be climbing a pretty steep slope if they hope to land its 18th title.