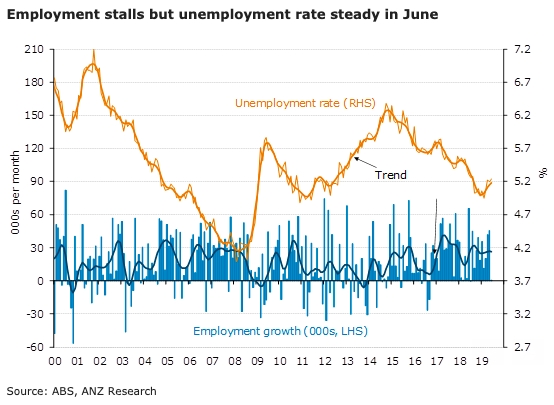 Australia’s unemployment rate remained at 5.2 percent in June, despite flat employment and the participation rate fixing at the record high of 66.0 percent. The temporary boost from election-related jobs reversed in June and a range of indicators has been pointing toward slowing employment growth for some time, according to the latest report from ANZ research.

Employment increased by just 500 workers in June, as the 21.1k gain in full-time employment more than offset the 20.6k fall in part-time employment. After spiking at 2.9 percent y/y on the back of the inflated May result (due to the election), growth fell back to 2.4 percent y/y.

The unemployment rate was unchanged at 5.2 percent despite zero monthly employment growth and the participation rate fixing at the historic peak of 66.0 percent. In a positive sign, the underemployment rate fell 0.4ppt back to 8.2 percent, on the back of the rebound in full-time employment, recovering most of the 0.5ppt rise over the past three months. This brought the total labour market underutilisation rate down to 13.4 percent.

For the first time in years, Western Australia was the standout performer of the states. The 13.8k gain in employment was the largest monthly increase since January 2017 and the unemployment rate consequently fell by 0.5ppt to 5.8 percent, despite a rise in the participation rate.

"The ANZ Labour Market Indicator suggests that employment growth will slow further and that the unemployment rate will stick around the 5.2-5.3 percent mark for the remainder of 2019. Without signs of progress on unemployment, we expect to see further easing by the RBA before year-end," the report further commented.