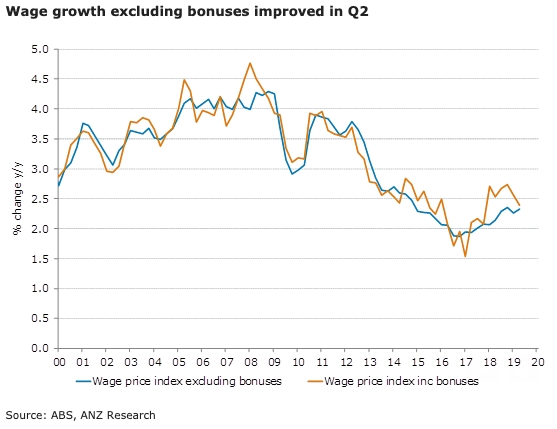 Australia’s wage price index (WPI) rose by 0.6 percent q/q in the June quarter, maintaining annual growth at 2.3 percent for the fourth consecutive quarter, according to a report from ANZ Research.

The “most significant contribution” to quarterly growth came from public sector health, where ABS Chief Economist, Bruce Hockman, said that “a number of large increases were recorded in Victoria under a plan to ensure wage parity with other states”. This temporary effect boosted public sector wage growth to 2.6 percent y/y, but this was largely offset by a decline in private sector wage growth to 2.3 percent y/y.

Aside from health and public administration, most industries saw annual wage growth slow in Q2. The largest decline in growth was in wholesale trade (-0.6ppts), followed by finance, transport, and admin services (all -0.2ppts).

Victoria extended its lead over the other states, with growth improving to 2.9 percent y/y, but this was inflated by the public health wage increases. Meanwhile, South Australia and the Australian Capital Territory recorded rises of 0.1ppt but all other states were either stable or slowed.