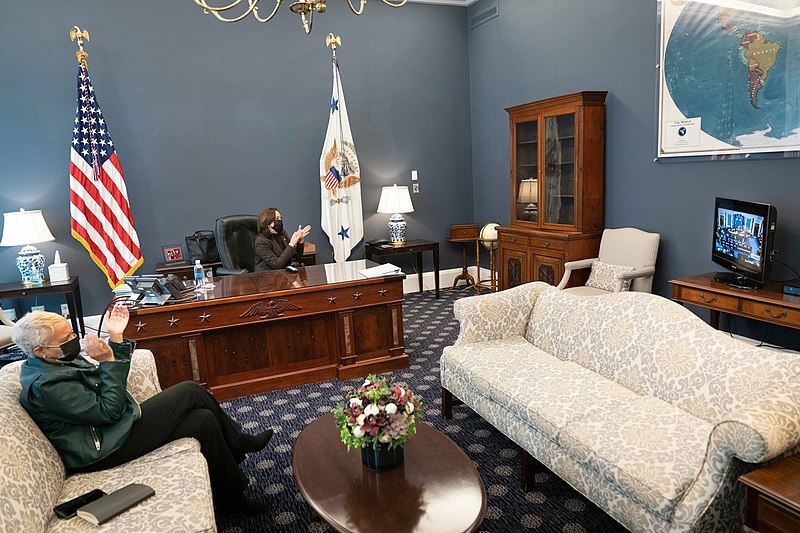 With a very evident divide in Congress, the Biden administration looks to bring back some bipartisanship outside the halls of the Capitol. Vice President Kamala Harris hosted a private dinner with all 24 female Senators in her DC residence this week.

Harris invited all 24 female Senators to the vice president’s Naval Observatory residence Tuesday night for a private dinner. 16 Democratic and eight Republican Senators were invited, the dinner is the first known time Harris has hosted lawmakers in the vice presidential residence. The lawmakers dined on roasted mahi-mahi with strawberry rhubarb croustades and vanilla ice cream, according to Nebraska Republican Sen. Deb Fischer, who shared the menu, paired with wines from California, Harris’s home state.

Following the dinner, GOP Sen. Marsha Blackburn told Fox News that there was no policy talk during the private event. Blackburn said the vice president was a “gracious” host and the dinner event was “lovely.” The Tennessee lawmaker added that had there been discussions of policy, she would have told Harris to visit the southern border.

“But if she had brought up policies, I would’ve loved to have said ‘Madame Vice President, you need to get to the border. You need to talk to Border Patrol’” said Blackburn, who noted that the dinner was an annual bipartisan event for the female lawmakers at the Senate. However, the annual dinner in 2020 was canceled due to the pandemic.

“What a wonderful bipartisan women senators dinner at our @VP’s residence! Thank you Kamala! I am so proud of you!” tweeted Michigan Democratic Senator Debbie Stabenow. Arizona Democratic Senator Kyrsten Sinema was not present at the dinner as was Mississippi Republican Cindy Hyde-Smith.

In other news, Harris met with 16 Democratic state lawmakers from Texas at the White House following the push by Texas Republicans to pass a more restrictive state voting law. The Texas House Democrats blocked the passage by walking out of the session. During their meeting, Harris noted the 2013 ruling by the Supreme Court to nullify the lynchpin of the landmark Voting Rights Act - an act that Democrats are looking to bring back with the sweeping voting reform bills.