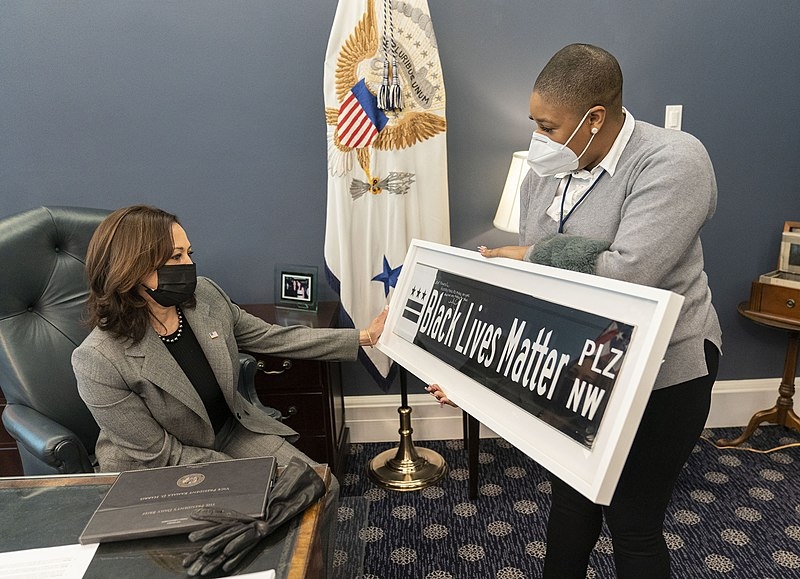 This week, Vice President Kamala Harris met with George Floyd’s family to mark the anniversary of his death. In a statement reflecting on their meeting, Harris urged lawmakers to act quickly in passing legislation to hold law enforcement accountable.

In a statement released by the White House, Harris reflected on her meeting with Floyd’s family along with President Joe Biden. This week marked the anniversary of Floyd’s death that sparked widespread Black Lives Matter protests all over the country. Floyd’s killer, a white police officer Derek Chauvin, pleaded guilty on all three charges of second and third-degree murder and second-degree manslaughter.

“Today, the President and I met with the family of Mr. George Floyd. Mr. Floyd should be alive today. He should be with his family who continue to show courage, grace, and resilience,” said Harris in the statement.

Harris noted that while Chauvin was held accountable for killing Floyd, the guilty verdict on him is not enough to address police brutality, especially against people of color. Harris added that this will not take away the grief and pain that Floyd’s family still feels as well as those families who have lost loved ones to police brutality. Harris then called for Congress to take immediate action in passing the Justice in Policing Act.

“After Mr. Floyd was murdered, Senator Cory Booker, Representative Karen Bass, and I introduced the Justice in Policing Act to hold law enforcement accountable and build trust between law enforcement and the communities it serves. Congress must act swiftly and act with a sense of urgency. Passing legislation will not bring back those lives lost, but it will represent much-needed progress,” said Harris.

Also this week, Harris also addressed the latest shooting that occurred, this time in San Jose, California. The shooting took place at a Valley Transportation Authority rail yard, killing 10 people including the shooter, who was identified as an employee of the VTA. Harris took to social media, saying that she is waiting on details on the latest shooter, but extended her condolences to the families of those who were killed.

Harris once again urged Congress to pass legislation regarding gun violence in the country.