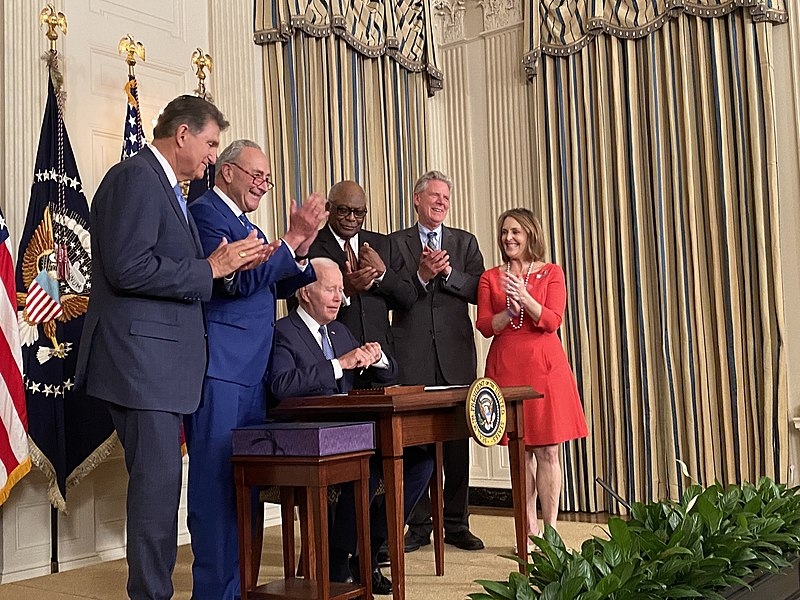 US President Joe Biden marked another legislative feat along with Democrats in Congress this week as the Inflation Reduction Act was signed into law. The Democratic-led legislation would address climate change, energy, inflation, and prescription drugs.

Biden signed the $430 billion Inflation Reduction Act into law in a ceremony at the White House Tuesday. The bill passed both the House and Senate on party lines without any Republican support, and Biden was joined by Democratic leaders of both chambers, including West Virginia Democratic Senator Joe Manchin, one of the two major holdouts in the Senate.

The US leader also criticized Republicans for unanimously opposing the bill amidst efforts by Democrats to use the recent legislative victories to gain an edge in the upcoming midterm elections.

The November elections would determine which party has control of one or both houses of Congress, and the Democrats are hoping to expand their majorities in the House and the Senate.

Senate Majority Leader Chuck Schumer, who was present during the signing, said Biden knew when to be involved in the negotiations and when not to be involved.

“He knew precisely when to step in and when to let negotiations play out. He knew when to use the bully pulpit and when to bring people together away from the spotlight. He made sure we never lost our focus on climate,” said Schumer.

Four members of Congress are now urging Biden to appoint a new envoy to Haiti as the country suffers from political and civil unrest. Representatives Val Demings, Yvette Clarke, Ayanna Pressley, and Sheila Cherfilus-McCormick penned a letter to the US leader, asking to appoint a new special envoy for Haiti.

The post was created shortly after the assassination of Haitian President Jovenel Moise in July last year. Daniel Foote, who was the envoy at the time, resigned months after being appointed in protest against the mass deportation of Haitian migrants and the country’s overall policy on Haiti.