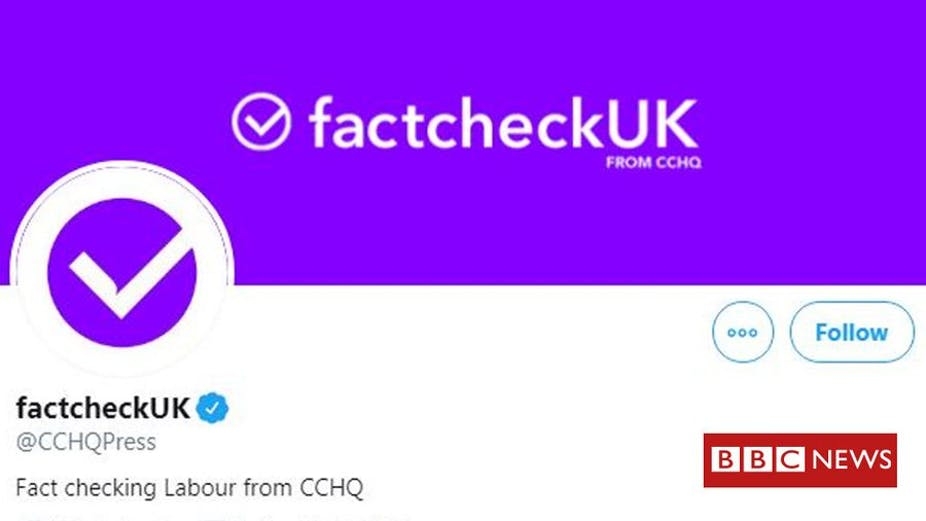 The Conservative Party's official Twitter feed was changed to resemble an independent fact checking site during the leaders' debate. Twitter 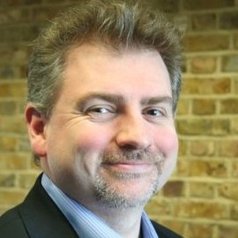 How many times, when a media SNAFU makes the headlines, have you heard the question asked: “Is this conspiracy or cock-up?”. Just look at the social media furore about the BBC using archive footage of Boris Johnson at the Cenotaph, rather than film of this year’s Remembrance Sunday commemoration. Many people on social media complained it presented an unduly positive image of the prime minister and BBC Breakfast’s editor, Richard Frediani, was forced to make a red-faced apology.

While it can be tempting to build up a complex conspiracy theory to explain these sort of events, in most cases, a mistake is the simplest answer.

But that is clearly not the case with what is perhaps the most controversial moment of the digital election campaign thus far, the decision to dress up the Conservatives’ press office Twitter channel as an impartial fact checking service called Factcheck UK during the head-to-head televised debate between Johnson and Jeremy Corbyn.

The account proceeded to tweet various pro-Conservative statements, preceded by the word FACT, before declaring Johnson the winner.

Twitter, which tends towards younger, metropolitan and left-wing users, erupted in outrage and the platform itself issued a yellow card threatening “decisive, corrective action” if the stunt was repeated. Even Johnson was asked about it and had to harrumph his way through an answer in which he claimed not to understand the twittersphere.

But this was no mistake – it is just the latest idea dreamt up by the Conservatives’ digital team, led by two New Zealanders, Sean Topham and Ben Guerin. The pair are not yet out of their 20s but are seasoned political campaigners. They are credited with leading the successful digital campaign that helped re-elect Scott Morrison’s Liberal party in Australia in May 2019.

The Conservative campaign has been dominated by allegations of digital dirty tricks. The digital team has built a fake Labour manifesto site and another that claims to show the cost of a Corbyn government based on figures which FullFact branded “largely meaningless”.

They’ve bought Google ads for searches such as “the Labour Party” and edited videos to give misleading impressions. One was of Labour’s Brexit spokesman Keir Starmer apparently failing to answer a question, the other was of backbencher Jess Phillips seeming to criticise Labour’s manifesto, when in fact the footage was weeks old and she was discussing manifestos in general.

This is part of a deliberate strategy to create noise on social media, to encourage users to share content in anger or outrage, fuelling its viral reach.

This is helped along with what many are now branding as “shitposting” – creating poor quality or outrageous content that goes viral across the internet from hyper-engaged political users to people who are less interested in politics. It is worth saying that even describing this activity as shitposting has created its own small backlash, as it is not how some internet users understand the word.

Guerin described the approach he and Topham had taken to convince voters to support his clients in their successful election campaign in Australia:

The best social media strategy is water dripping on a stone. You’ve got to be pushing the same consistent message day in, day out. The challenge is to find a variety of content to do so.

Many of the posts the Conservative Party shares are simple “memes” – garish posts designed to grab the users’ attention and to be shared without considering carefully the veracity of the message. Like this one, which, while true, fails to mention some Conservative governments have done the same.

There are endless variations on the themes of “Back Boris” and “Get Brexit Done”. Or attacking Corbyn’s indecisiveness.

These are the so-called “Boomer Memes” – hundreds of quickfire posts, with little aesthetic value, cranked out to dominate social media users’ feeds. When used in the Australian election this content was especially appealing to voters of the Baby Boom generation - hence the name.

But it is not just the Conservatives who have been pushing hard at the barriers of acceptability in this election. Labour too have tried to co-opt the language of fact checking with a subsidiary website, The Insider. It too claims to fact check political statements and positions but it is not an independent service merely a party political one.

Meanwhile the Liberal Democrats’ use of misleading bar charts on election leaflets ended up being lampooned in a joke animation by Labour. It even amused Craig Oliver, the director of communications for David Cameron when he was prime minister.

Tearing up the rules

But the Conservatives are the party pushing the boundaries of digital campaigning. While it is the incumbent party of government, it is widely perceived to have lost the social media battle in 2017. The Conservatives are now fighting this digital election as disruptors.

Not so the Labour Party. It developed a successful formula in 2017 and is fighting a very similar campaign in this election. The Labour accounts are thick with animated policy explainers that aim to explain the party’s positions, as well as videos that paint Corbyn as a radical but plausible leader who can connect with ordinary voters. This strategy has crtainly attracted plenty of viewers. But a look at the most-watched videos on Twitter shows Labour, while dominant, is not having it all its own way.

The real point to understand from all this is that the digital campaign remains the wild west of electioneering. There is no regulator that will ensure the content of political adverts is either factual or fair – and the Advertising Standards Authority has made it clear it cannot oversee the sector.

Nor is the Electoral Commission concerned with ensuring parity between the parties, except in spending on the campaign. While the commission has outlined some recommendations for greater transparency, it wouldn’t end dirty tricks. As the commission made clear, it is “not in a position to monitor the truthfulness of campaign claims, online or otherwise”.

The House of Lords’ Democracy and Digital Technologies Committee, which is chaired by Lord Puttnam, has been hearing evidence on the issue. But there is little incentive for the parties to drive quick uptake of any recommendations it makes, once parliament resumes.

At least for now, it seems the only people who have the power to reform the system, are the very people leading in its abuse.