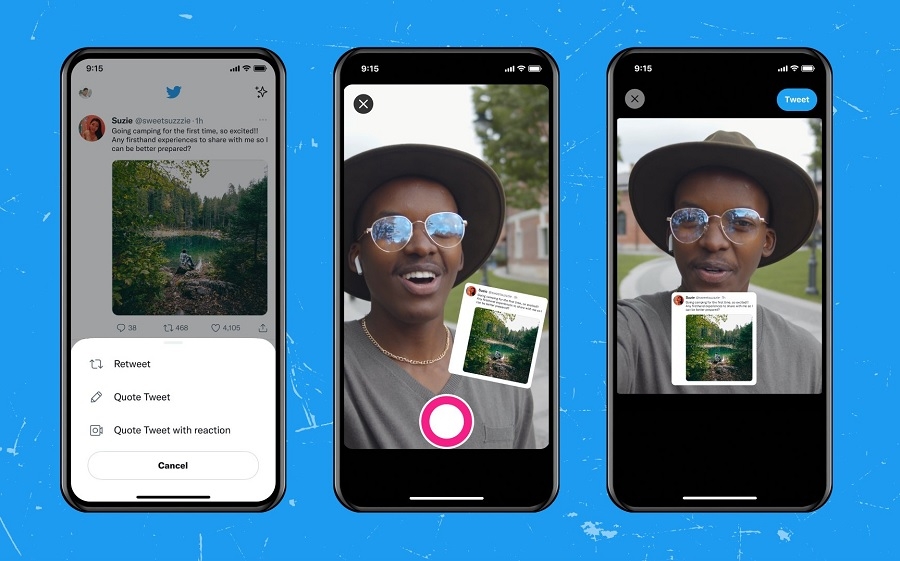 Twitter is looking to add more ways for its users to retweet posts on its platform. This time, the social network giant announced a new feature that would allow people to attach their own photo or video reactions when retweeting.

If that feature sounds familiar, that is because a similar function has been available and widely used on TikTok for a while now. In Twitter’s version, the new feature will be available by tapping the retweet button. Users can choose from three actions, including Retweet, Quote Tweet, and the new “Quote Tweet with reaction.”

The sample images from Twitter that show the original tweet being reacted to will be attached (along with any embedded media file) to the video reaction. The Verge shared a screen recording of the feature in testing, which shows that upon pressing the new Quote Tweet button, the app will open the camera to let users record their reactions.

The camera window will have a few buttons included to allow users to customize their reactions. There will be a flash button and a toggle to use either the rear or the front camera. The screenshot of the original tweet being reacted to can also be resized and repositioned. Once the user is done recording, more editing tools appear for filters, stickers, adding texts, and cropping the reaction video.

The same screen-recorded preview also shows that aside from capturing live reactions, the Twitter feature will allow users to get pre-recorded reactions by opening their Camera Roll. Aside from a video reaction, there is also a Capture button that can be used if the user wants to react with just a still image.

However, some users have already expressed concerns about the Twitter feature currently being tested on iOS. One Twitter user said it could be used as an “easy harassment button.” But the company told The Verge, “The safety of people on Twitter is our priority and while we don’t anticipate this being used in a harmful fashion, we’ll be closely monitoring the usage of the product and ensure that any abuse is adjudicated as per the Twitter Rules.”