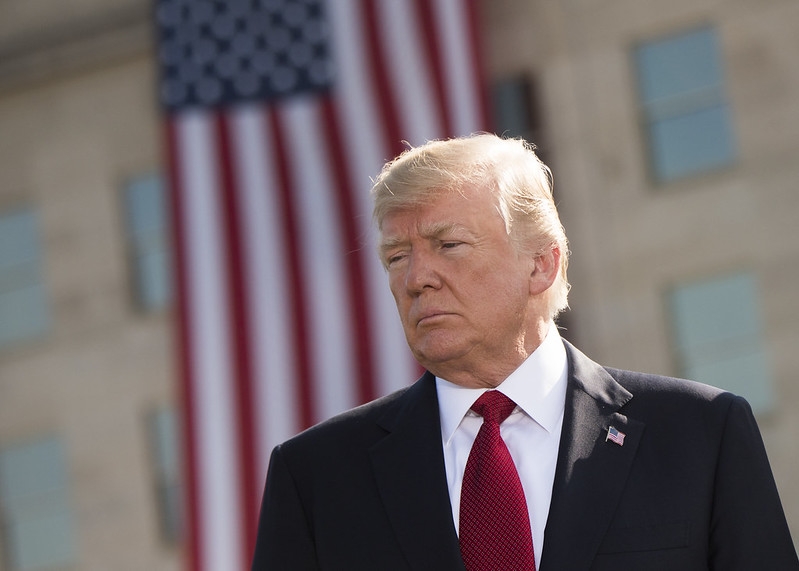 President Donald Trump pauses during the 9/11 Observance Ceremony at the Pentagon in Washington, D.C., Sept. 11, 2017. During the Sept. 11, 2001, attacks, 184 people were killed at the Pentagon. To the left is first lady Melania Trump, and to the right are Secretary of Defense Jim Mattis and Chairman of the Joint Chiefs of Staff Gen. Joseph Dunford. (DOD photo by Navy Petty Officer 1st Class Dominique A. Pineiro)

About two weeks since a transcript of Donald Trump’s phone conversation with the Ukrainian president was revealed, his approval with all polls in the FiveThirtyEight aggregate is 41.6% and his disapproval is 54.0%. Trump’s net approval is -12.4%, down 2.5% since last fortnight’s article.

With polls of registered or likely voters, Trump’s approval is 42.2% and his disapproval is 53.9%, for a net approval of -11.7%, down 3.4% since last fortnight. The Ukraine scandal has had a small but discernible impact on Trump’s ratings.

As I wrote previously, I did not expect this scandal to have a serious or lasting impact, as better-educated voters already detest Trump, while lower-educated voters are far more focused on the economy. Indeed, after an initial drop, Trump’s ratings have stabilised recently.

While there has only been a modest drop in Trump’s ratings, support for impeachment has risen sharply. Before the Ukraine scandal, 51.0% opposed impeachment and 40.1% supported it, according to the FiveThirtyEight tracker. Currently, 49.2% support impeachment while 43.3% are opposed. Support has risen strongly among Democrats and non-aligned voters, but only modestly with Republicans.

The vast majority of Trump disapprovers now support impeachment, but the Ukraine scandal has not converted many Trump approvers into disapprovers.

Despite the increased public support for impeachment, there is very little chance that the Senate, which Republicans control 53-47, will reach the two-thirds majority required to remove Trump from office before the November 2020 election. In the RealClearPolitics average, Trump has well over 80% support for the Republican presidential nomination, with the other three candidates at about 2% each. Republican senators are very unlikely to go against their party’s base.

In head-to-head polling against the three leading Democrats in RealClearPolitics averages, Trump trails Joe Biden by 7.4 points (7.7 points last fortnight). He trails Elizabeth Warren by 4.5 points (4.0) and Bernie Sanders by 5.2 (4.8).

Last week, there were worse than expected September industry surveys for the services sector in both the US and Europe. However, the US added 136,000 jobs in September and the unemployment rate dropped to 3.5% – the lowest since 1969. The one negative aspect of this jobs report was that hourly pay dropped 1c after increasing 11c in August.

The low US unemployment rate is not just because of low participation. The employment population ratio – the percentage of eligible Americans who are employed – increased 0.1% to 61.0% in September, its highest since December 2008, near the beginning of the global financial crisis.

My view is that, bad as Trump’s ratings are, they would be worse without the strong US economy; this explains why Trump’s ratings improved during September as the recession talk from August faded. If the US jobs reports continue to have good news until November 2020, Trump will have a reasonable chance of re-election.

There are two economic policies being pursued by the right that could undermine the global economy. One is the US/China trade war, where talks this week are unlikely to make progress. The other is Brexit, particularly a no-deal Brexit. A no-deal Brexit may occur on October 31, but is more likely after an election that current polling indicates the UK Conservatives would win.

Warren surges to tie with Biden in Democratic polls

In the RealClearPolitics average of Democratic national polls, Warren and Biden are virtually tied, with Warren at 26.6% and Biden 26.4%. It is the first lead for anyone other than Biden. Sanders is at 14.6%, Pete Buttigieg at 5.6%, Kamala Harris at 4.4% and nobody else has more than 3%.

Since the September 12 Democratic debate, Warren’s support has increased at the expense of Biden, Harris and Sanders. Some of Sanders’ recent drop is probably due to his October 1 heart attack.

The big exception to Warren’s rise is South Carolina, which is the last of the four early states to vote on February 29. Owing to strong black support for Biden, he has a lead over Warren exceeding 20 points in three post-debate polls in that state.

The next Democratic debate will be held on October 15. Contrary to my previous expectations, the 12 qualifying candidates will not be split over two nights, but instead appear all on one night. The threshold has been increased for November and future debates, and so far eight candidates have qualified for the November 20 debate.

The Canadian election will be held on October 21. The CBC Poll Tracker has the Conservatives and Liberals virtually tied in voting intentions, with the Liberals ahead on seats, but short of a majority.

Voters favoured prioritising the US relationship over China by 56% to 25%. All figures from The Poll Bludger.