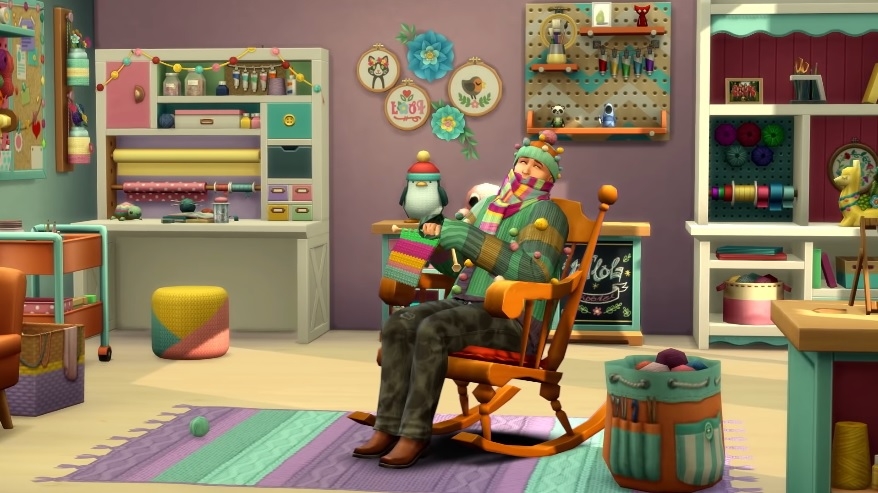 From the official trailer of “The Sims 4: Nifty Knitting” | Photo credit: EA/Maxis via The Sim channel / YouTube screenshot

After months and different rounds of online polls, the community-approved Stuff Pack is finally unveiled along with its features and release date. Before “The Sims 4: Nifty Knitting” arrives, there are two fundamental features to this content bundle that players need to learn.

Yarn Basket: Where it all begins

What sets “The Sims 4: Nifty Knitting” apart from other Stuff Packs is that it is not just about new items to be added in the game. It will introduce an all-new knitting system that will allow Sims to develop a new hobby, and it will also start once players acquire the Yarn Basket from the Build/Buy catalog.

The Yarn Basket also works somewhat different from other crafting items in the game as Maxis designed it to be kept in the Sim’s inventory. This will allow the Sims to bust out their knitting skills anywhere. Starting a knitting hobby will require some Simoleons, but the developers promised the cost will not be too high.

Like any other hobby, knitting skills will start at a very basic level but it will be elevated to more complicated patterns. Once players unlock more type patterns, “The Sims 4: Nifty Knitting” will let them work on multiple projects and any progress will be saved on the Sim. The official gameplay trailer also hints that Sims can knit more than just the usual scarves, beanies, and socks as toddlers are seen holding different designs of knitted dolls.

In “The Sims 4: Nifty Knitting,” players can get their Sim to start knitting anywhere there is a seat, yes, even in the toilet. However, knitting while sitting on the all-new rocking chairs will earn them bonus points for their new hobby. But rocking chairs are also good for something else.

The same trailer shows non-knitting Sims, like elderly characters and toddlers, using the rocking chairs for different purposes. Children can use it to play, but the rocking chairs add a new action for elder Sims called Reminisce. As the name suggests, this will initiate a sequence of memories on their elders’ mind swirls. “What Elders take away from the whole experience is up to their personality traits,” the developers previously said.

The new knitting hobby system and rocking chairs somewhat make “The Sims 4: Nifty Knitting” a must-have once it is released on July 28. Luckily, anyone who already has the base game will likely need just $12.90 to get it, which is the standard price for the game’s Stuff Packs.