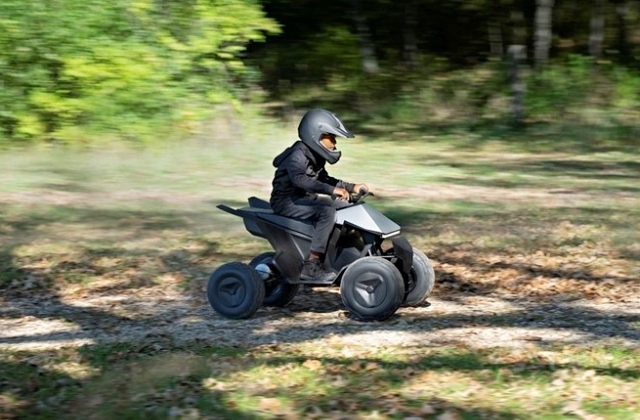 Tesla Inc. unveiled an all-electric quad bike for kids called the "Cyberquad," and it is currently being offered in the United States. The bike cost $1,900, and it is the latest electric item to be released after the company introduced its all-terrain vehicle (ATV) and Cybertruck.

As per Reuters, the -Cyberquad for kids is a four-wheel ATV that was created using the Tesla Cybertruck as inspiration for the design. Elon Musk's electric vehicle company stated that it would begin the shipment for the ATV for kids within two to four weeks.

Then again, there are regions where Tesla could not ship the Cyberquad for kids, and this includes Puerto Rico, Hawaii, and Alaska. The new electric product was officially announced on Wednesday, Dec. 1, via Tesla's website.

The Tesla Cyberquad is suitable for kids eight years old and above. As posted in the description, the product was inspired by Tesla's iconic Cybertruck design, "the four-wheel ATV features a full steel frame, cushioned seat and adjustable suspension with rear disk braking and LED light bars." The EV maker further shared the ATV is powered by a lithium-ion battery with up to 15 miles of range and a configurable top speed of 10 mph.

It appears that Tesla already received many orders as soon as the Cyberquad ATV for kids was revealed. In fact, it was indicated on the company's online store that it is already out of stock.

Those who have already placed their orders may not be getting the Cyberquad in time for Christmas. For sure, some parents bought this to be given as gifts for their children, but some orders may be delivered after the holidays.

At any rate, the Tesla Cyberquad bike for kids was launched in partnership with Radio Flyer, the maker of the iconic Little Red Wagon. This is the third time that the two companies are collaborating, and this time, it is for the electric ATV for children.

"We are excited to continue our partnership with Tesla with our latest creation, the Cyberquad for Kids by Radio Flyer. At Radio Flyer, we are committed to creating high-quality, innovative products that can be passed down from generation to generation," chief wagon officer for Radio Flyer, Robert Pasin, said in a press release. "Partnering with the most innovative, sustainable auto company in the world both aligns with our brand values and allows us to welcome brand-new fans in Tesla enthusiasts."