Crime and punishment: Rural people are more punitive than city-dwellers

Should we tax arms manufacturers to finance refugee resettlement? 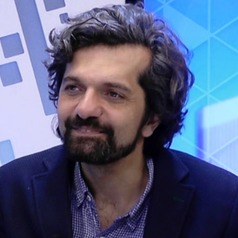 Today 68.5 million people are forcefully displaced worldwide. In 2018 alone, this number increased by 16.2 million: 11.8 million displaced within their national borders and 4.4 million seeking asylum outside. We are going through an unprecedented refugee crisis.

Wars in Syria, Yemen, South Sudan and Afghanistan have been the most significant contributors to the surge in the number of both internally displaced and asylum seekers.

These conflicts have led to an unprecedented level of destruction, of whole cities and communities, due in part to the increased volume and sophistication of weapons available to all warring parties. Technologies such as remotely activated explosives, drones, mines and projectile launchers are now available not only to national armies but also to militias.

An overall increase of 87% in arms purchases in the Middle East in the last three years, compared to the preceding one, increases the chances of further tension and mass destruction in the region. Countries such as Saudi Arabia, the UAE, Turkey and Qatar have been stockpiling a vast arsenal of weapons. There is a similar arms build-up in Asia led by China, India and Japan, but also Australia, which has massively increased its arms purchases in the past three years.

Drawing upon tax schemes developed for tobacco and climate change, I propose a transnational tax scheme levied on all international weapons sales, the “destruction tax”, that would finance a “reconstruction fund”. Such a scheme would put a downward pressure on international arms sales, and also can make funds available for refugee resettlement and post-war reconstruction.

Arms’ business: a highly skewed distribution of costs and benefits

Civilians and the environment withstand the worst of the destructive forces in military conflicts. Meanwhile, the warring parties absorb very little of this cost. Similarly, the arms and military companies – whose sales totalled 398.2 billion US dollars in 2017 – are key beneficiaries from warfare. But they play no role in addressing the social and environmental costs from the use of their products.

The companies, mostly from the United States, Russia, Germany, France, China and the UK, are at the forefront of the global arms sales, which has been growing steadily.

Arms as the new cigarettes?

The economics and social effects of arms have a lot in common with cigarettes and other products with destructive effects.

During the past few years we have made significant progress in using fiscal solutions to decrease the consumption of dangerous products and to cover the social cost of their use. The idea of such tax schemes was first introduced by the British economist Alain Pigou in 1920s and it is hence called the Pigouvian tax. Such a tax would aim to make markets absorb the cost of the “negative externalities” that products cause the society and environment. Since, this proposal has led to extensive academic debates and policy experimentations.

Increased cigarette taxes throughout the Western world have decreased use and also made it possible to cover partly the public health costs of smoking. Such taxes became common in 1990s, with rates around 20% of the sales price, and by 2018, they have increased to around 80% of the sales price in many OECD countries.

There are similar initiatives for integrating the environmental cost of products’ use in their cost structure and pricing. A good example is the inclusion of carbon emissions and pollution in the cost structure of fuel, which governments ranging from China, Singapore and Japan to South Africa, Canada, the European Union and several US states have experimented with.

The “destruction tax” is essentially a proposal to introduce a transnational Pigouvian tax for arms sales to deal with the destructive effects of warfare.

A hypothetical “destruction tax” of 10% on international arms transactions would yield annually a maximum of around 40 billion US dollars in revenue (depending on where and how the scheme is executed). The jurisdictional power and territory of the body that will manage the tax scheme will be a major defining factor. For example, a UN-based scheme can cover a much larger portion of the global arms sales compared to one organised by the European Union, but it would have less enforcement power. The funds from such a tax scheme would then be transferred to a transnational “reconstruction fund” to finance post-war reconstruction. 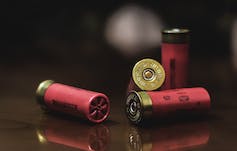 A 10% tax on arms’ transaction. A way to cover the wars’ destructive effects? dxl/Unsplash, CC BY

The level of such as a tax, whether it is a flat rate or a progressive one proportionate to the destructive effects of weapons, and how it would be disbursed and to whom, are issues that need to be debated and decided through a political process. Similarly, it would need to be debated whether such a tax would be applied only to the final products or also to the arms production supply chain. The benefits of such an initiative that I detail below would bring more political appetite to increase the tax rate afterwards and to implement it in other arenas and jurisdictions (as has been the case with tobacco, alcohol and environmental emissions).

A “destruction tax” would have four crucial benefits: 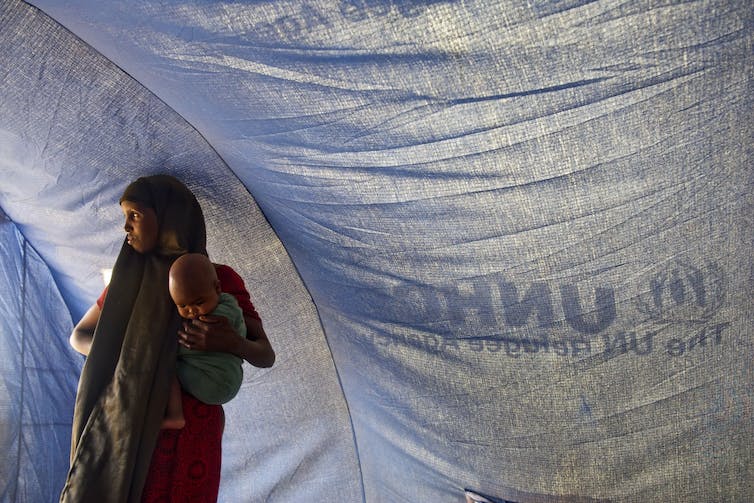 A Somali refugee stands inside a tent with her baby in Dollo Ado, Ethiopia. Fleeing drought and famine in their home country, thousands of Somalis have taken up residence across the border in Dollo Ado where a complex of camps is assisted by the UN Refugee Agency (UNHCR). Eskinder Debebe/Flickr, CC BY-NC-SA

Considering the deep ties of the US administration and the legislative bodies with the country’s military industry, such option seems far-fetched at present. Similarly, governments of European countries such as France and the UK have been mostly unconditionally supportive of their respective military firms and their international dealings. However, other European countries less involved in the arms markets who are dealing with the brunt of the costs of the refugee crisis in Europe such as Greece but also many Eastern European countries should be more supportive of such a tax.

Considering the increased number of progressive voices both in the European Union in the form of green parties, and US legislative bodies – the highly active and vocal Congressional Progressive Caucus is a good example – there is a political momentum to start the debate and to produce detailed proposals for such a transnational tax. This would prepare the grounds and help build momentum for its eventual enactment.

In the longer term, countries neighbouring major wars and conflicts such as Turkey, Pakistan, Lebanon, Uganda, Iran and Jordan – that have been hosting about 85% of refugees from wars in Syria, Palestine, Afghanistan, South Sudan, Iraq, Libya and Somalia over the past several decades – can mobilise to initiate such debates and to trigger action at the United Nations.