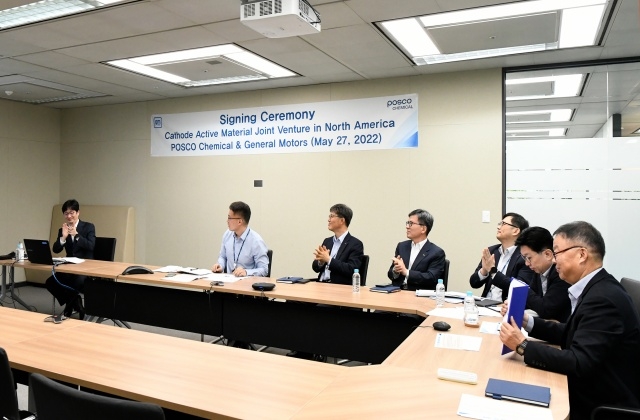 POSCO Chemical revealed on Friday, May 27, that it is building a new facility for the production of cathode worth $327 million. It has partnered with General Motors for this project, and they have picked Quebec, Canada, as the site for the project,

According to Yonhap News Agency, POSCO Chemical and General Motors inked a final agreement deal to set up their joint venture in Quebec. Their JV has been named the Ultium CAM, and the cathode plant is set to rise in Becancour, Quebec, by 2024.

This cathode facility is expected to produce around 30,000 tons of high-nickel cathodes a year, and this amount is said to be enough to make batteries for 220,000 electric vehicles or EVs.

Once the plant is in full operation, POSCO Chemical and GM are also planning to expand the production later. The construction of the Quebec cathode facility is set to begin in August.

A cathode is an important part when making EV batteries and accounts for around 40% of the production costs. In any case, this project is part of the POSCO Group's, POSCO Chemical's parent company, strategy to strengthen and broaden its EV business.

Moreover, POSCO Chemical also intends to further branch out overseas and enter other markets such as Indonesia and Europe. The company will gradually increase its annual cathode production capacity of 105,000 tons this year to 280,000 tons by 2025. Then in five more years, in 2030, it expects to produce 610,000 tons.

"We will produce the highest quality battery materials and enhance customer competitiveness based on world-class technology and close cooperation between the two companies," POSCO Chemical president, Min Kyung Zoon, said in a press release. "We will lead the transition of the electric vehicle era in North America by establishing a stronger partnership with GM."