Oil: why higher prices will complicate the energy transition 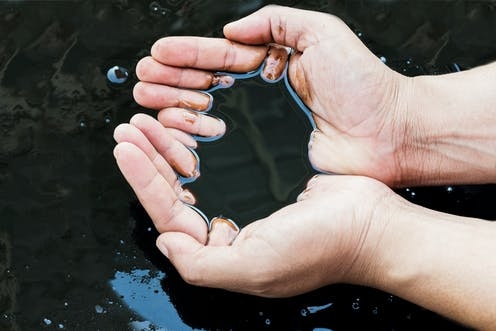 Oil and trouble. Pix One 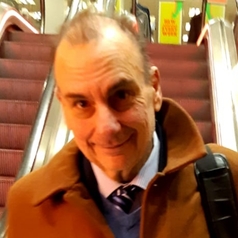 The oil price is on a rollercoaster. Having crashed into negative territory just last April, the price of Brent crude climbed all the way to US$70 (£50) earlier in March. It has since slid below US$64. So where is it heading and what are the implications?

There are several reasons why oil prices surged from their 2020 lows. One is a common belief in an imminent “commodity supercycle”, in which an explosion in economic activity after the pandemic creates soaring oil demand.

Supply has been limited since Saudi Arabia and Russia cut production in spring 2020. The suspicion then and consensus now is that this sought to force down prices to drive less efficient US shale oil producers out of the market. It has substantially had that effect, with less shale entering the market as a result.

The price of oil (Brent crude, US$) 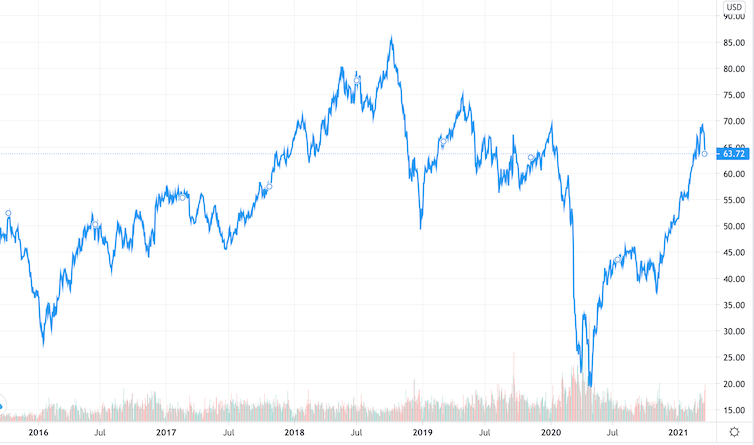 Prices have eased in the past couple of days amid fears that Europe’s vaccine difficulties will slow global recovery, and thanks to a stronger dollar after the US Federal Reserve declined to curb rising Treasury bond yields at its most recent policy meeting on March 17.

Nonetheless, the direction of oil prices looks like it will be broadly upwards: most oil majors are signalling reductions in capital expenditure. Meanwhile, Opec, the 13-country cartel of oil nations, has a vested interest in continuing to restrain production to keep prices higher, while the whole framework of the Paris climate agreement aims to make oil production more expensive. This will be passed on to consumers in the form of higher prices.

As for oil demand, it is still expected to climb for many years, despite the rise of renewables. A recent study by BloombergNEF forecasts that the green agenda will only push oil into structural decline from 2035.

Admittedly, carbon taxes may soften demand by increasingly penalising companies for using fossil fuels – whether through the EU Emissions Trading Scheme, the new China scheme, or the proposed London Voluntary Scheme or US scheme. But it will depend on how the rules develop. The EU scheme is the most advanced but includes lots of exceptions that currently minimise the requirements on numerous sectors.

Oil and the wider economy

The oil price and its relationship with the economic recovery, bond prices and inflation is going to be vital to the post-COVID world order. Oil prices are closely linked to inflation. This is because it has a multiplier effect as it circulates through markets: for example, it is an unavoidable cost for companies that run vehicles, who then pass it on to consumers by increasing the price of their goods and services.

In the US, there are already substantial concerns about the inflationary impact of the US$1.9 trillion stimulus package, particularly when the Federal Reserve has signalled that it will tolerate more inflation than previously. Rising oil prices feed into these concerns.

Long-term interest rates rise with inflation worries, and have duly been climbing sharply recently. If this continues, it could limit what the US government can borrow to spend on infrastructure. At the same time, inflation is liable to make the infrastructure more expensive.

The Fed therefore has an incentive to keep interest rates as low as possible, and there has been much speculation about whether it will do this by buying more long-term Treasury bonds. But that could further stoke inflation, which could end up pushing oil prices up further, so it’s a question of striking the right balance between over-stimulating and under-stimulating the economy. If inflation is held at bay, lower or at least stable oil prices may result, just like after the global financial crisis of 2007-09.

In the UK, the situation is a bit different. Inflation has remained low as oil prices have dropped. COVID-19 reduced demand for UK oil drastically and drilling activity has been negatively affected. Higher prices should help reverse this, depending on the oil demand from abroad – including from Europe.

In developing countries that depend on exporting oil and other natural resources, higher prices are definitely welcome. Many middle-income, including Nigeria and Indonesia, have seen government budgets taking a hit from the fall-off in demand during the pandemic.

In Nigeria, the government has been forced to devalue the naira to stimulate the economy. In such circumstances, rising oil prices can be a relief – including for exporters of other commodities such as industrial metals, whose prices are linked to oil.

The oil price has implications for the ability of nations to meet the net zero emissions targets required under the Paris Agreement.

More expensive oil should hasten the tipping point where renewables become the cheapest way of generating electricity and powering transport. The lower cost of renewables compared to fossil fuels has already been helping to make them more attractive.

Yet paradoxically, higher oil prices also provide incentives to oil companies to spend more on exploration and production – a potential step in the wrong direction for achieving net zero emissions. And in developing countries that depend heavily on oil exports, higher prices mean more money for spending on society, which boosts government popularity. So they too may prioritise greater oil exploration and production, potentially at the expense of developing renewables and meeting nationally defined carbon targets.

This is not to say that higher oil prices will negatively affect the scope or pace of renewables spending overall. But they have to be further developed and built, so higher oil prices certainly risk progress in developing countries. This means that being able to keep oil prices from getting too high will play a key role in the pace and scope of the energy transition.