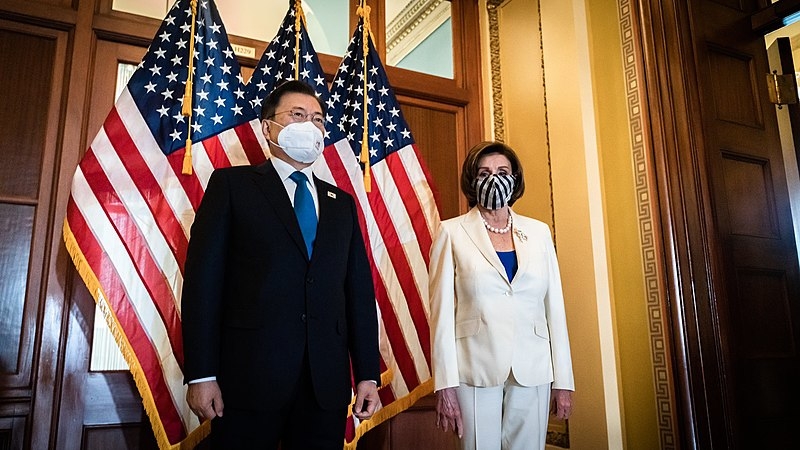 Despite the more relaxed guidelines that were announced by the CDC in recent weeks, House Speaker Nancy Pelosi still maintains the strict protocol of requiring the use of face masks when on the House Floor. Georgia GOP Rep. Marjorie Taylor Greene, among those who have openly defied Pelosi, called the California Democrat “mentally ill” over maintaining the mask mandate.

Greene, known for pushing conspiracy theories, compared the requirement of all House members to wear face masks on the House floor, to the Holocaust. Greene also slammed Pelosi, calling her “mentally ill” for maintaining the protocol. The freshman congresswoman’s comments follow her response to Pelosi’s warning letter regarding openly violating said protocol by shredding the letter in a video on social media.

“This woman is mentally ill,” said Greene on “The Water Cooler” on the Christian Broadcast Network. “You know, we can look back at a time in history where people were told to wear a gold star, and they were definitely treated like second-class citizens, so much that they were put in trains and taken to gas chambers in Nazi Germany. And this is exactly the type of abuse that Nancy Pelosi is talking about.”

Greene’s disparagement was quickly slammed on social media, including organizations like the American Jewish Congress. The criticism towards Greene touched on the historical inaccuracies she made in her comments as well as comparing the restrictions in place to combat a world pandemic to a mass genocide that killed millions of Jews. Political satirist and filmmaker Jeremy Newberger questioned if Greene thought that Hitler was protecting Jews from a pandemic.

Previously, Pelosi also drew the ire of former vice president Mike Pence’s brother, Indiana GOP Rep. Greg Pence regarding the events of January 6. Pence claimed that Pelosi did not want to return to the joint session of Congress following the insurrection. However, Pelosi strongly refuted the Indiana Republican’s claim.

“He completely does not know what he’s talking about,” said the House Speaker to a reporter from The Hill. “I was a force for coming back from the start, and I’m glad it was bipartisan that we all agreed to come back. But he knows not of what he speaks and he can ask his brother if he wants to get any more information.”