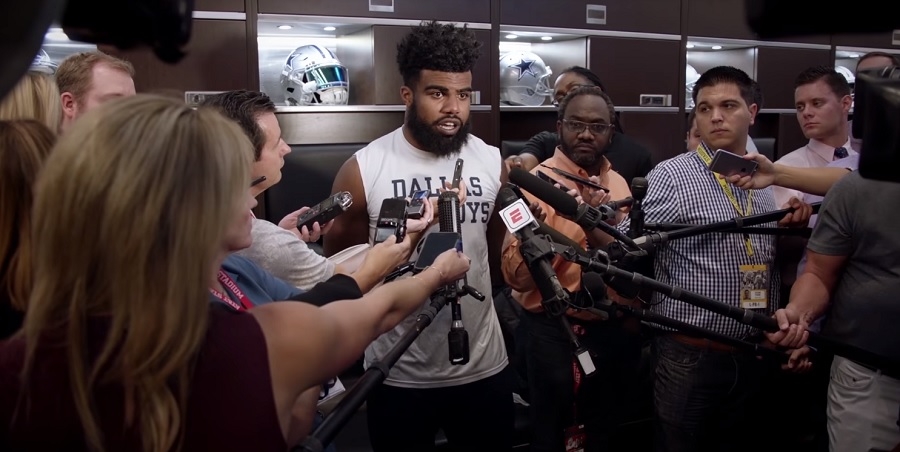 Ezekiel Elliott in the official trailer of “All or Nothing: The Dallas Cowboys” | Photo by Amazon Prime Video/YouTube screenshot

Around this time of the year, National Football League (NFL) fans often hear the word about players holding out on training camp along with contract negotiations. After weeks of NFL rumors, running backs, Ezekiel Elliott of Dallas Cowboys and Melvin Gordon of Los Angeles Chargers are reportedly seeing different results.

First-round NFL picks are often signed with for a four-year contract along with the team’s fifth-year option. The latter means the franchise can keep them for another year even without a more permanent contract. These usually end up as reasons for the players to holdout to demand their respective teams to give them considerable deals. It could result in the athlete’s favor while sometimes it leads to a trade when the organization will not budge.

In the case of Elliott, he reportedly staged a holdout in April to convince the Dallas Cowboys to sign him for a more permanent contract. He reportedly skipped the training camp in summer, but latest updates suggest Elliott and the Cowboys could soon arrive at a deal.

And now headed back to Dallas. pic.twitter.com/cooFUZCWlv

Elliott, who reportedly stayed in Cabo during training camp, is now expected to return to Dallas after fans saw him and his agent, Rocky Arceneaux, on a flight from Cabo to the Cowboys’ home city. With that, the running back could be slated to sign a contract extension as early as Wednesday.

As for Gordon’s holdout and hopes to sign a contract extension, no definitive updates have surfaced yet. When Chargers head coach Anthony Lynn was asked about it on Wednesday, he said he did not discuss the issue with the other players during training camp. Lynn added, “We've been talking about this for a month and a half. Now, it's time to play football."

The Chargers are opening their 2019 regular season with a match against the Indianapolis Colts on Sunday, Sept. 8. Reports have it that instead of granting a new permanent contract and a pay raise, the Chargers have permitted Gordon to seek a trade. With a very short time left before Week 1 officially starts, Gordon could end up wearing a new jersey this year.