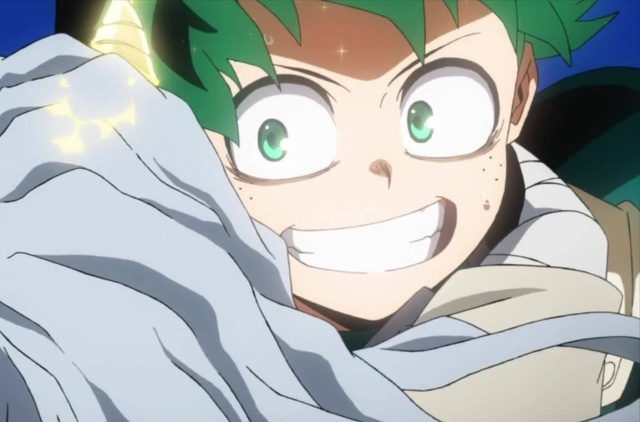 The battle between the heroes and Shigaraki continues in “My Hero Academia” chapter 277. Deku was the villain’s target but he was saved by Gran Tonio. Still, it is inevitable for Deku to face Tomura and this will happen in the upcoming chapter.

In the previous “My Hero Academia” chapter 276 titled “You Cheated...!” a helicopter was deployed to check out the situation in Jaku City. Through the news, it was revealed that almost a third of the whole place has been destroyed.

At this point, the heroes, students and the authorities continue to guide the civilian so they can evacuate safely. They are doing the best they can to get the people out as fast as possible.

Through the live telecast, All Might and Eri saw the situation and they were reminded about the previous incident in Deika City since the situations look similar. There were also some places where dust and debris swirl and that is surely an indication that the heroes are fighting with the villains but they could not see who they are.

Gran Torino saved Deku and Bakugo by taking them far away from Tomura Shigaraki. Eventually, Endeavor faces the supervillain. With his sidekick, Kido, who used his Traject Quirk to manipulate Endeavor’s trajectory so he can find Tomura, they were able to successfully attack their enemy.

The no. 1 hero attacked Shigaraki and although there were successful attacks, Endeavor realized that Shigaraki’s strength is almost the same as All Might’s even is he has no quirks. On the other hand, Dr. Garaki regretted the fact that Shigaraki’s power is not equal to All Might and if he wants this to happen, he would need to upgrade Shigaraki again which is risky as his brain could be damaged. Thus, currently, Tomura is just a perfect Nomu.

“My Hero Academia” chapter 277 will show what happens next to Tomura and Endeavor’s battle. It will also reveal whether Aizawa survived and who will get the most damage between Shigaraki and the no. 1 hero.

Hawks and Mirko survived and they may show up in “My Academia” chapter 277. While the heroes may defeat Shigaraki at some point, there will be heroes who will perish as they sacrifice themselves to weaken the enemy. Deku, Aizawa and Bakugo are finally expected to face Shigaraki in this chapter too.

As posted on VIZ Media, “My Hero Academia” chapter 277 is set to be released on July 5. Fans can also expect the raw scans that will arrive between the dates of July 2-3.