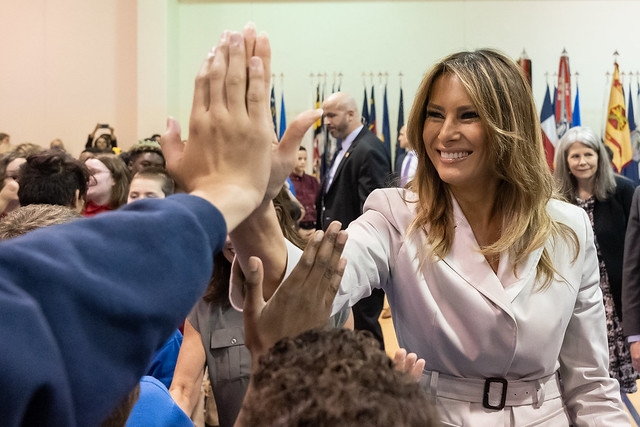 It was not a surprise that United States First Lady Melania Trump made headlines for her wardrobe during their three-day official visit in the United Kingdom last June 3-5. Being a former model, she is expected to be one of the best-dressed first ladies that ever set foot in the White House.

Being part of a family known for its businesses and riches, it is also not surprising that she has an expensive taste in fashion. Reports estimated that Mrs. Trump spent more than $56,000 on her day 1 outfits alone.

On her way to London, she was seen wearing a printed Gucci dress designed with icons of the most popular destinations in the city that was reportedly priced at $4,400. Upon arriving in London, Mrs. Trump donned a printed Burberry pussy-bow blouse ($820), Michael Kors blazer and pencil-cut skirt ($650), and a pair of Christian Louboutin heels ($695).

President Trump and the First Lady join The Prince of Wales and The Duchess of Cornwall for tea at Clarence House. #USStateVisit pic.twitter.com/BvhrQgkTEJ

Mrs. Trump came out in a custom Dolce & Gabbana monochromatic dress upon meeting with Her Majesty and Camilla, Duchess of Cornwall on their first day in London. The said dress is estimated (via Daily Mail) to have cost somewhere between $19,000 to $25,000.

To close day 1 with a bang, Mrs. Trump wore a custom white, sheer-neckline Dior gown for the royal banquet. The same report noted that it was part of the label’s 2019 spring collection and was estimated to be priced at least $31,000 and reportedly could go up to $38,000.

The Prince of Wales, The Duchess of Cornwall @ClarenceHouse The Duke and Duchess of Cambridge @KensingtonRoyal, The Duke of York and The Earl and Countess of Wessex are also in attendance at the #USStateVisit banquet at Buckingham Palace. pic.twitter.com/rSWSNV1FKn

Now, before her critics raise their eyebrows for that one-day price tag, it is important to recall that she had once settled the issue of who pays for this staggering amount of clothes. Mrs. Trump’s official spokesperson Stephanie Grisham previously told Bustle, “She pays for all her own clothes.”

Meanwhile, her fans should not be surprised by now with the prices listed above. It can be recalled that Mrs. Trump made headlines in 2017 after spotted wearing a $51,500 Dolce & Gabbana jacket while attending the G-7 Summit in Italy.