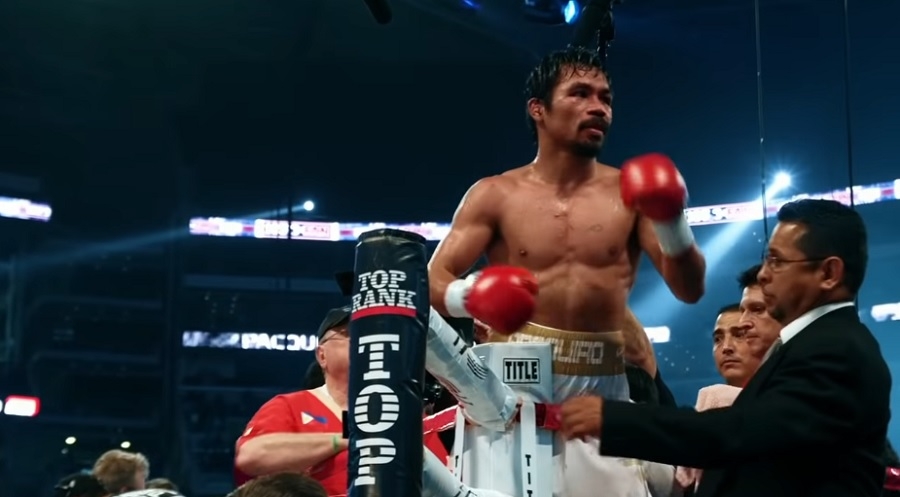 From the trailer of the movie-documentary "Manny" released in 2014. | Photo via Movieclips Indie/YouTube screenshot

There are only a few days left before former eight-division boxing champion Manny Pacquiao faces a much younger Keith Thurman in a blockbuster fight in Las Vegas, Nevada. Several boxing analysts, trainers, and fighters have mixed opinions on who is going to emerge victorious on Saturday, July 20 at the MGM Grand Arena.

For Pacquiao’s former sparring partner Amir Khan, however, the 40-year-old boxer is more likely going to win. And, of course, Khan is also looking forward to becoming Pacquiao’s next opponent.

Pacquiao vs. Thurman: Khan says experience and speed will help boxer from the Philippines

Pacquiao maybe 40 years old, but he remains one of the biggest names in the sport. Defeating him in a pay-per-view match would certainly boost an opponent’s reputation and career. One of those hoping to get that opportunity is Khan.

When asked to weigh on about the upcoming fight, Khan told ITV Boxing that Pacquiao’s experience with better opponents, speed, and movement would likely make up for his age in this fight with Thurman. Khan also took note of Thurman’s fight with Joselito Lopez last January. “Thurman's last fight wasn't the best,” Khan said. “I mean he did have a very tough fight against Joselito Lopez, and it didn't look the best, he obviously had that shoulder injury and had been out [of] the ring for a long time.”

Prior to facing Pacquiao, Thurman came off a 22-month break after suffering from a string of injuries on the elbow and hand. Many doubted he could pull off his fight with Lopez noting that his last match was back in 2017, especially when Lopez rocked him hard in the seventh round. But he eventually won via majority decision, thus, making his fight with Pacquiao more plausible.

Pacquiao vs. Thurman: What the experts are saying

If Khan is convinced that Pacquiao’s speed will help him win, a veteran trainer interviewed by ESPN thinks otherwise. The expert said Pacquiao has gotten and older and not as fast and strong as he once was adding that it is not easy to land a powerful punch on Thurman. To this, Pacquiao responded that his good health allows him to do what he did when he was younger. “The speed is still there, the strength is still there, so that's why I'm still here continuing my career,” Pacquiao added.

Pacquiao’s long-time coach, Freddie Roach, is obviously the one betting big on the Filipino champion. The veteran trainer does not only believe Pacquiao will win, but he also thinks he could knock out Thurman on the ninth round.