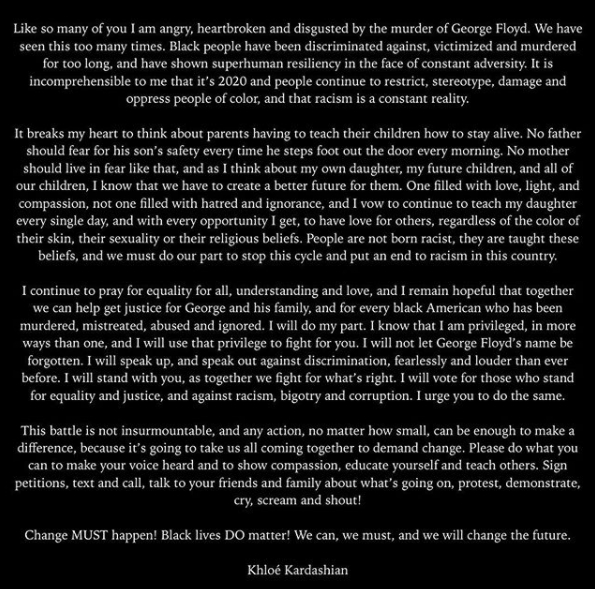 Keeping Up With The Kardashians star Khloe Kardashian has spoken out about fearing for the future of her black daughter, True, following the brutality of George Floyd's death at the hands of a white policeman in Minneapolis.

Kardashian's two-year-old daughter was fathered by Tristan Thompson, who plays center for the Cleveland Cavaliers.

The reality star posted a long message on her Instagram account, wherein she speaks of her fears for True's future being black.

She decried the constant reality of racism and expressed the disgust that she felt with how Floyd died.

Floyd, 46, was reportedly arrested for allegedly using a fake $20 bill in buying cigarettes. Two policemen responded to the 911 call, one of them, 44-year-old Derek Chauvin.

Chauvin, in a disturbing footage of the arrest, was seen putting pressure on the back of Floyd's neck with his knee while the latter was complaining that he cannot breathe.

Floyd was later on brought to the hospital, wherein he was pronounced dead later. Chauvin has been sacked and is now facing murder charges.

Floyd's death has sparked a lot of protest in several cities of the US, and many have taken to the streets in support of these protests, including celebrities.

Kardashian continued that no parent should have to fear for the lives of their children every time they step outside their homes regardless of the color of their skin.

She asked her followers to educate themselves about the Black Lives Matter movement.

She also stated that it is already 2020, and yet, racism still exists in full force.

She pleaded to her followers to speak out, do something, make a stand to help end racism, and create a better world for their children.

Kardashian also promised that she would do whatever she can and to the utmost of her capabilities to effect this change.

Kardashian is not the only one in her family who has black children. Her sister Kim who is married to Kanye West, is mother to North, Saint, Chicago, and Psalm West, while youngest sister, Kylie Jenner, is mother to Stormi Webster, fathered by Travis Scott.