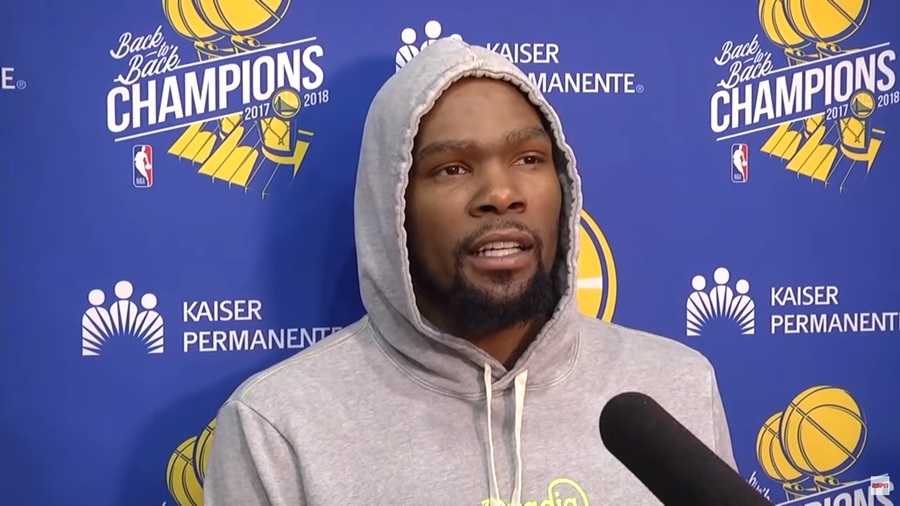 Following the announcement that Kevin Durant will not be playing in Game 1 of the Playoff Finals, fans of the Golden State Warriors have been asking when the 30-year-old will return. Unfortunately, the team hasn’t revealed a timetable when this will be, although coach Steve Kerr did say that Durant has yet to practice on the court, SportingNews reported.

However, Kerr did say that Kevin Durant will be doing “individual court work,” hinting that his healing process is going swimmingly. The superstar sustained his injury during the Warriors versus Rockets series where he strained his right calf.

While not severe, it’s unclear what grade the strain is. But judging by how long Kevin Durant has been sidelined, it appears that it’s a grade 1 strain. A grade 1 strain needs two weeks to heal and completely vanishes at four to six weeks. Grade 2 strain, on the other hand, requires eight to 10 weeks, Harvard Health Publishing reported.

With Steve Kerr saying that Kevin Durant will be doing some on-court activity, it seems that they’re gearing the superstar to join in the second game. Of course, this isn’t set in stone just yet since the team is also monitoring the status of the injury.

Whatever the case, the Warriors will not have Kevin Durant on their line up tomorrow, leaving Stephen Curry to lead the team. So far, the team has done well without their best player on the court, having beaten the Rockets in the Western semis and swept the Portland Trailblazers in the Conference Finals.

Of course, the Toronto Raptors is a far more dangerous opponent since Kawhi Leonard is on the team. “The Claw” has been the best player in the east this Playoffs, carrying his team past the Philadelphia Sixers and the Milwaukee Bucks. With Kevin Durant absent from the Warriors’ roster, Leonard will undoubtedly be guarding Curry tomorrow, which is quite problematic for the sharpshooter. As for the 30-year-old himself, he admitted that he doesn’t know much about his injury as his trying not to aggravate it.

“Just taking it a second at a time. I try to focus on (the present) and not think too far down the line because I don't really know too much about this injury. I'm just leaving it to the hands of the team doctors, and I trust the direction they are trying to put me in,” Kevin Durant said.