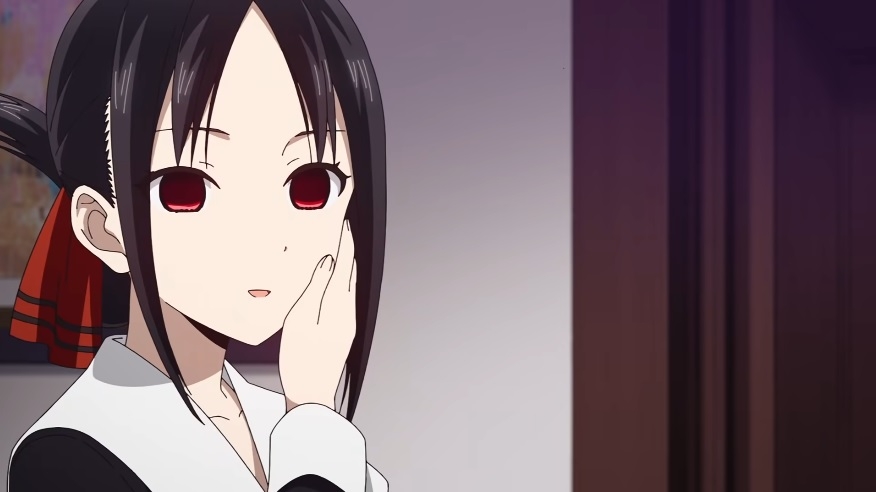 “Kaguya-sama: Love Is War” chapter 199 picks up from the events following the final exams at Shuchiin. The rankings worry Kaguya thinking that Miyuki’s sudden drop means he does not “give bait to a fish” he has already caught.

Kaguya is surprised upon seeing she is the top 1 of their class, tied with Maki, while Miyuki dropped to the 12th place in “Kaguya-sama: Love Is War” chapter 199. The President is, surprisingly, not bothered by these results but explains that he is now more focused on preparing for his college admission in the United States in the next six months.

The change in rankings becomes a topic of discussion between Kaguya and Nagisa. The latter suggests in “Kaguya-sama: Love Is War” chapter 199 that Miyuki may have no longer be making an effort to land in the first place of school rankings because he is already dating Kaguya. Nagisa likens it to fishing saying that boys do not give bait to a fish they have already caught, which then worries Kaguya.

She then attempts to “test” Miyuki if he really is not making an effort anymore now that they are dating. Kaguya meets with the President in the student council room and starts the conversation by giving him random tasks such as getting her a drink or asking him to massage her feet. This “Kaguya-sama: Love Is War” chapter 199 sequence is a good nod to the theme of the series and shows that the mind games do not stop even if Miyuki and Kaguya are together now.

In the end, however, Kaguya decides to be direct and tells Miyuki what is bothering her in “Kaguya-sama: Love Is War” chapter 199. Fortunately, the day ends without any misunderstanding between the couple and Kaguya offers to give Miyuki a massage as an apology. And right on the dot, Miko enters the student council room, thus, catching them again in another awkward situation.

‘Kaguya-sama: Love Is War’ chapter 199 release date, where to read

The information above is based on a reported leaked and translated scans of “Kaguya-sama: Love Is War” chapter 199, so fans should still take the information at face value. There might be inaccuracies in the dialogues and translations, but the good thing is the next chapter will be released on Thursday, Aug. 27.

Unlike other manga series with a digital release in English for every chapter, fans will have to depend on reliable channels that translate the new chapters of Aka Akasaka's manga series. They can refer to this subreddit for ways to read “Kaguya-sama: Love Is War” chapter 199 this week.