FxWirePro: Unwise to get bull-trapped by NZD/USD, stay hedged on IV Skews as RBNZ likely to stay pat in June but OCR cuts in August 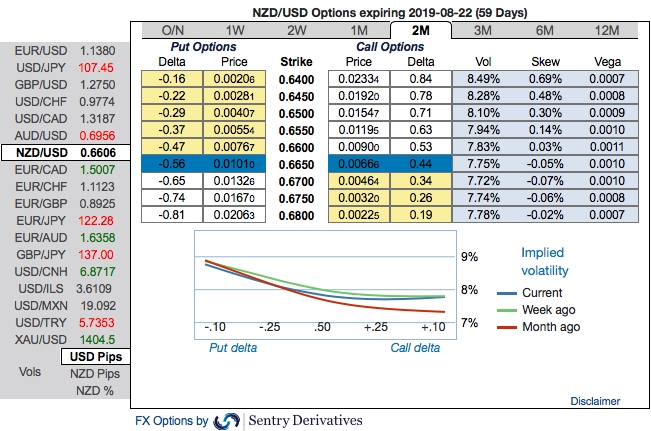 In May, the RBNZ cut the OCR and mentioned that the outlook was finely balanced between having to cut once more at some stage or leaving the OCR on hold at 1.5% for an extended period. The RBNZ has stated that it is now in “data-watching mode”, meaning it could jump either way depending on what happens.

RBNZ is now expected to leave the OCR on hold in this upcoming June meeting review. The balance of risks has evolved in the direction of another cut (mainly due to global developments), but not so emphatically that the RBNZ needs to cut the OCR again so soon.

As discussed in this week’s essay, we now think the odds favor the RBNZ cut the OCR to a new low of 1.25% in August. Hence, we reckon that the prevailing rallies of NZDUSD are momentary, NZD is expected to depreciate towards 0.61 levels by year-end.

In contrast to Australia, where the export-relevant commodity markets are already tight, New Zealand’s agricultural exports are subject to both a negative demand shock (China), and a loss of market share (negative domestic supply shock with rising global supply). Dairy prices have weakened, dragging the trade balance to the widest deficit in a decade. While the fall in oil prices will likely offer some reprieve, exports remain constrained and are unlikely to benefit from a redistribution of China’s GDP growth toward fixed asset investment.

Most importantly, 3m IV skews are right indications for NZD that have clearly been indicating bearish risks. Hence, the major downtrend continuation shouldn’t be panicked the broad-based bearish outlook amid minor rallies.

The global risks are reckoned to play less conducive for NZ than they do for Australia, and the central bank has reason to be credibly dovish even as the data have outperformed some of the downside risk scenarios laid out earlier in 2018. NZD is expected to depreciate to 0.60 by year-end.

While the NZDUSD trade is underwater following positive news reports on a US-China agreement. The erratic nature of news flow is one reason why we had suggested NZDUSD shorts via options in the past that with ITM put instruments which are most suitable amid prevailing conditions. 3m NZDUSD (1%) in the money put options have been advocated, in the money put option with a very strong delta will move in tandem with the underlying.

The trade projection is now out of the money but we maintain exposure given tail risks to high beta FX as noted earlier. Courtesy: Sentrix & Westpac

Currency Strength Index: FxWirePro's hourly NZD spot index is inching towards 5 levels (which is neutral), while hourly USD spot index was at -79 (bearish) while articulating (at 08:16 GMT).