FxWirePro: The Major Driving Forces of Antipodeans, Trading And Hedging Strategies Ahead of RBNZ 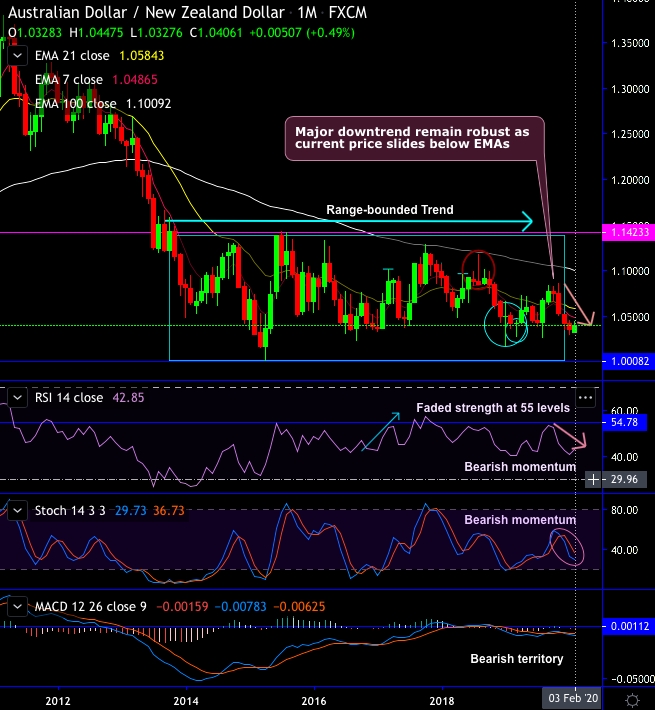 RBNZ is scheduled for their first monetary policy of 2020 in the next week, the market pricing for Kiwis central bank implies a near-zero chance of easing on 12 February, with a terminal rate of 0.85% (RBNZ OCR currently at 1.0%). While Westpac forecasts of RBNZ OCR sees a rate cut to 0.75% in August, followed by a long period on hold.

Of late, the trend of Antipodeans (AUDNZD) has still been drifting in the range as stated in our previous post, it has been oscillating between a tight range of 1.0475 – 1.0307 levels from last couple of days.

In the medium term perspectives, the 5c fall since early Nov could stretch to the 1.0300 area, with NZ’s better fundamental backdrop (including yield spreads and commodity prices) and expectations of RBA QE weighing. Fair value remains much higher but will require global tensions (trade and geopolitical) to subside.

Since the early December, NZD is showing resistance, the pair at around 1.0450 – 1.05 levels that have been tested several times in the recent time and failed, but remains vulnerable to a break higher.

Yield spreads, commodity prices, and recent NZ economic outperformance are conducive for NZD. The coronavirus-led plunge in iron ore price has outpaced the fall in dairy prices. Against that, the RBA today was surprisingly upbeat, supporting AUD for now. During the year ahead, we expect the RBA to cut by 50bp and engage in QE, vs the RBNZ cutting 25bp only.

The broader perspective tells us that AUDNZD has been oscillating between 1.1425 and 1.0025 levels from last 5 years. The main driving forces at this juncture, is the reversal of NZ-AU yield spreads following the RBNZ’s shift to an easing bias (while the RBA remains neutral). AU economic data has been strong too (retail sales, trade). There’s little major economic news out this week, apart from consumer confidence.

Hence, considering all the above aspects of this pair, we advocate the below options strategies on both trading and hedging grounds.

AUDNZD Strangle Shorts: At spot reference: 1.0410 levels, it is prudent to write a (0.5%) out-of-the-money call and (0.5%) out-of-the-money put options of 1m tenor. The strategy can be executed at the net credit and certain yields would be derived in the form of initial premium received as long as the underlying spot FX remains between OTM strikes on the expiration. The major trend that has been range-bounded (oscillating between 1.1425 and 1.0025 levels) and lower IV scenarios would be the most conducive for this strategy.

Thereby, one can arrest the momentary upside movements of the underlying spot FX, and directionally position via shorts of March deliveries to hedge the downside risks in the major trend. The directional implementation of the same trading theme by further allow for a correlation-induced discount in the options trading also if you choose strikes appropriately. Courtesy: Westpac