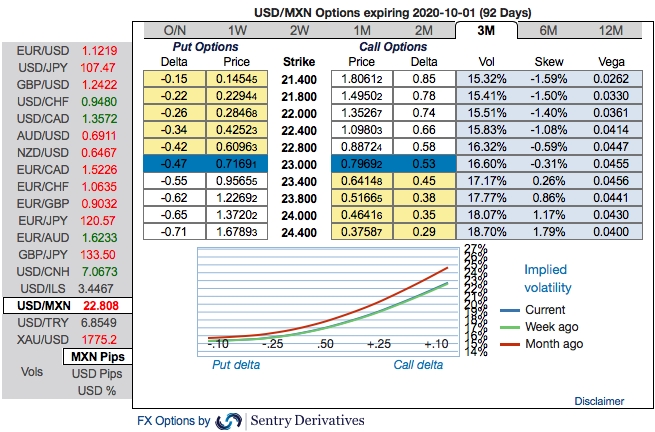 The recent publication of the PMIs in a number of countries illustrated a significant improvement of sentiment. It seems questionable though whether sentiment in Mexico has improved to the same extent (publication of the PMI today). But the corona virus is still spreading rapidly in Mexico and it is likely to be some time before the pandemic can be contained. The successor agreement of the NAFTA, called USMCA, will come into force today and that is likely to kindle hope in Mexico that the economy will recover rapidly from the corona shock as a result of foreign trade. The sceptics are likely to remain in the majority though. While the pandemic is still limiting economic activity or there is a risk of more severe restrictions in the future, the economy is likely to recover only slowly. Moreover some of the Mexican President Andres Manuel Lopez Obrador’s decisions caused uncertainty amongst companies, most recently also amongst foreign companies. Foreign as well as domestic investors have to expect their plans to be thwarted by the President, regardless of whether the projects have already been initiated. This reduces the attractiveness of Mexico as a location for investors. And in the end US President Donald Trump’s political decisions also entail risks. Regardless of a trade agreement Trump has proven repeatedly in the past that a country can quickly fall into disgrace.

We therefore expect that the economic recovery in Mexico will be rather slow. If market sentiment improves again the peso is likely to be able to benefit to some extent, but the depressed economic outlook is likely to limit the appreciation potential.

The peso has appreciated close to 8% over the last month, outperforming most of its EM peers, though still remains 15% weaker YTD. The recent rally was driven by a general improvement in risk sentiment in EM FX, helped by COVID-19 re-openings, a China V-shaped recovery (which helped EM BoP dynamics also), cheap valuations and very light positioning. MXN ticked all these boxes while also enjoying among the highest real rates in EM, which supported its rally further.

As stated in our previous posts, the positively skewed IVs of USDMXN of 3m tenors have delivered as expected and have still been indicating upside risks (bids for OTM call strikes upto 24.40 levels is observed), while IV remains on lower side and it is perceived to be conducive for options writers.

Considering the current MXN skew setup and the receding risks for MXN spot we are open to taking the gamma risk in order to more efficiently reap the extra OTM vs ATM premium on MXN put side. 1*1.5 MXN ratio put vol spreads have shown strong and almost equivalent systematic returns for USDMXN and EURMXN over last few years.