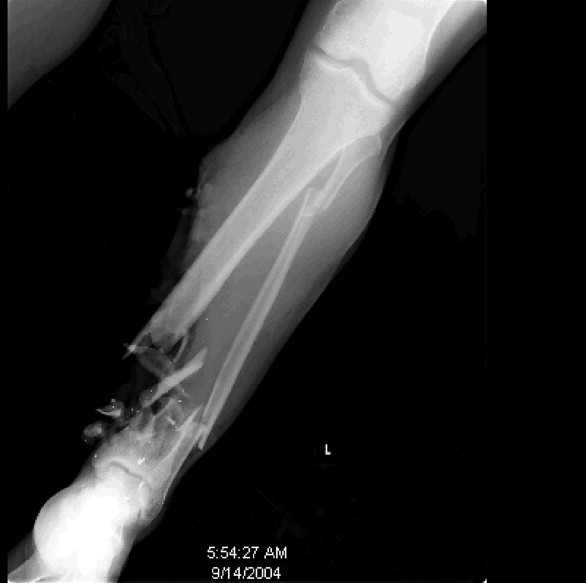 An x-ray of a forearm with a gunshot injury.

French orthopedic surgeon Emmanuel Masmejean faces legal action and a possible disciplinary charge for attempting to sell an X-ray as a digital artwork for around $2,776 on the OpenSea without the patient’s consent

The X-ray shows a forearm containing a Kalashnikov bullet of a concert-goer who was shot during the 2015 attack on the Bataclan music hall in Paris.

The patient is described as a young woman whose boyfriend was killed in the Bataclan attack, by Islamic State gunmen.

Masmejean described the patient on OpenSea as having “an open fracture of the left forearm with a bullet lodged in soft tissues.

Martin Hirsch, head of Paris’s public hospitals, confirmed on Twitter that a criminal and professional complaint would be lodged against Masmejean.

Hirsch called Masmajean’s action “disgraceful” and “scandalous,” saying it is contrary to sound professional practice, puts medical secrecy in danger, and goes against the values of AP-HP (Paris hospitals) and public service.

Masmejean acknowledged that he committed “an error” and that he should have sought permission from the patient before offering the X-ray NFT.

Masmajean, an experienced surgeon, a surgery professor, and a specialist in treating arm injuries claimed he had withdrawn the sale, but the image was still visible on Sunday.