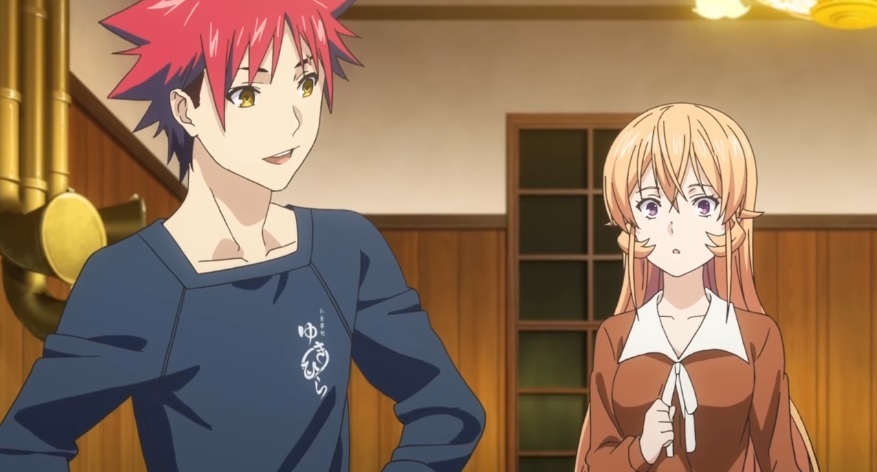 One of the reasons “Shokugeki no Soma’s” ending was not viewed as satisfactory by many fans is how the story ended with directly addressing Soma and Erina’s status as a romantic couple. Now that the anime series is ultimate ending in “Food Wars” season 5 episode 13, viewers are hoping to see a different and original conclusion to their story.

There have been several implications that Soma and Erina are becoming closer, especially in season 4 and in some earlier episodes in season 5. But the main protagonists never explicitly talked about their romantic feeling toward each other out loud. It was the same direction that the manga took through the end, but “Food Wars” season 5 episode 13 will have a chance to change that.

Producers have already revealed the preview screenshots for “Food Wars” season 5 episode 13 along with the synopsis. Unfortunately, they do not say much about what will happen after BLUE is over. Soma and Erina are going to compete for the final round, and if the anime will not change who this goes expect Erina to be the ultimate winner but not without Soma motivating her every step of the way.

“Food Wars” season 5 episode 13 is then likely to cover the events of the manga’s three-part epilogue “Le Dessert” where Totsuki chefs were seen returning to the academy. Soma, on the other hand, followed the same path as Joichiro and started traveling throughout the world to hone his culinary skills.

The manga had some tiny clues suggesting that Erina and Soma became much closer after BLUE. At one point in the epilogue, Erina is mad that Soma is barely texting her and she also seems to visit the Yukihira Diner very often. Still, the question remains if “Food Wars” season 5 episode 13 would make the status of their relationship more defined in the finale.

The manga also addressed the complications within Erina’s family that were brought up during the BLUE arc. But, obviously, anime fans are mostly concerned with how the producers are going to wrap up Soma and Erina’s story as a couple.

“Food Wars” season 5 episode 13 will be released on late Friday in Japan. Fans around the world can tune in on the series finale through Crunchyroll on Saturday, Sept. 26, at 12:30 a.m. PT.