'Cultured' meat could create more problems than it solves 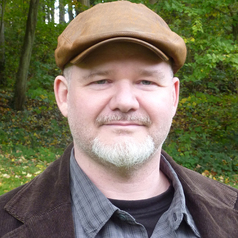 Cultured or in vitro meat, also called “clean meat” by its supporters, is meat produced in a laboratory using bioengineering techniques.

In 2013, Mark Post, professor at Maastricht University, presented the first hamburger made of cultured meat. Since then, the dream of being able to create and consume meat based on “cellular agriculture”, without livestock farming, has gained support among both animal-rights activists and, especially, players in the industry. A large number of start-ups have been created, with many sponsored by big names in the food industry. The ambition is to market cultured beef, poultry or fish meat at an affordable price by 2020 or 2022.

With this goal in mind, in 2018 the US Food And Drug Administration established a regulatory framework and this has opened the way for the marketing of these products.

So, is artificial meat a true food revolution or an impossible utopia?

According to the United Nations Food and Agriculture Organisation (FAO), conventional meat production accounts for a significant share of greenhouse gas emissions (18%) and land use (30%), as well as global consumption of water (8%) and energy. The FAO also estimates that meat consumption will double by 2050, while meat production is already close to its peak. What’s the solution to this problem?

According to Mark Post, “cows are very inefficient”, with a “bioconversion rate” estimated at 15%. In other words, to produce 15 grams of meat, you need 100 grams of vegetable protein. The only way to produce meat sustainably is to increase the efficiency rate.

Different methods have been considered in the past, such as producing meat made of plant- or insect-derived proteins. These alternatives, however, don’t always satisfy consumers due to cultural preconceptions and the difficulty of mimicking the taste and texture of conventional meat. In vitro meat could help bypass these problems.

How is meat grown?

In concrete terms, the first step is to isolate a small number of satellite muscle cells from an adult animal. The physiological function of those satellite cells is to participate in muscle regeneration: they are not yet muscle cells, but stem cells that are able to multiply and, under the influence of certain hormones, to differentiate into muscle cells.

The satellite cells are grown in bioreactors, which are sterile enclosures containing nutrient liquids, under stimulation with growth factors to induce rapid proliferation. They are then transformed into muscle cells and mechanically assembled into muscle tissue and then a consumable artificial steak…

According to the website of Mosa Meat, the Dutch company founded by Mark Post, the production of cultured meat would significantly reduce the environmental impact of meat production as well as the risk of infectious diseases transmitted from animals to humans. Moreover, the company asserts that the taste of cultured meat is close to that of conventional meat.

Cellular agriculture has also been touted by Paul Shapiro, author of the bestseller Clean Meat: How Growing Meat Without Animals Will Revolutionize Dinner and the World and CEO of the Better Meat Company. He asserts that cultured meat is the key to feeding a world population that will reach around 9.5 billion by 2050, while respecting animals and preserving the environment.

As indicated by a 2011 study, cultured meat can offer many advantages over conventional meat: It would reduce greenhouse gas emissions by 78-96% and require 7-45% less energy and 82-96% less water. However, more recent research suggests that over the long term, the environmental impact of lab-grown meat could be higher than that of livestock. Unlike the previous research, these studies considered not only the nature of the gases emitted, but also the energy costs of the infrastructures required for cell culture.

Animals have an immune system that naturally protects them against bacterial and other infections. This is not the case for cell culture, and in a nutrient-rich environment, bacteria multiply much faster than animal cells. To avoid producing a steak made up of more bacteria than meat, it is essential to avoid contamination, and that requires a high level of sterility.

In the pharmaceutical industry, cell cultures are carried out in highly controlled and sanitized “clean rooms”. Sterility is most often guaranteed by using disposable plastic materials. This significantly reduces the risk of contamination, but generates plastic waste, whose level in ecosystems is already alarming. Some of the culture materials are made of stainless steel and can thus be steam sterilized or washed with detergents, but these treatments also have an environmental cost.

While few studies have been done on the environmental impact of the pharmaceutical industry, the available data suggest that its carbon footprint may be 55% higher than that of the automotive industry. 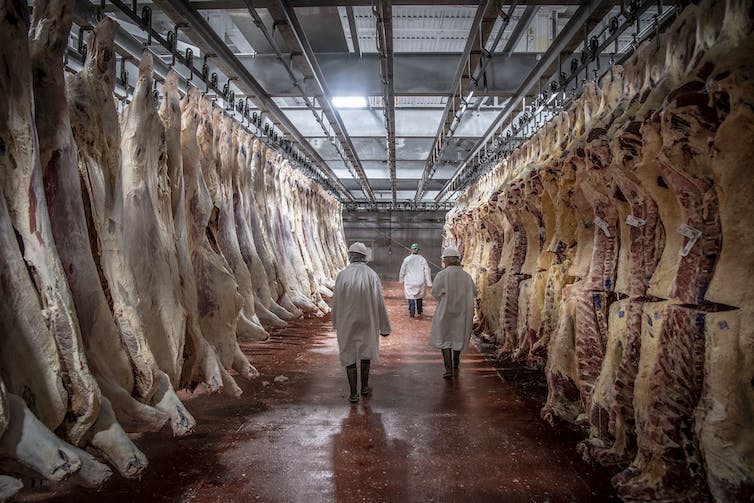 US Department of Agriculture meat inspectors and graders at work. Preston Keres/USDA, CC BY

Importantly, we should not forget that livestock fulfils many functions other than just the production of meat. It contributes to the recycling of large quantities of plant waste that cannot be consumed by humans and produces fertilizer. Furthermore, pastures capture and store carbon. What will replace them if meat is produced by cell culture? This means that it is extremely complex to evaluate the long-term environmental cost of a transition from conventional to cultured meat.

In animals, muscle volume increases slowly, and it takes time for muscular satellite cells to multiply. To obtain what an animal produces over several years in just a few weeks in vitro, it is necessary to continuously stimulate proliferation of the satellite cells with growth factors, including anabolic sex hormones.

These hormones are present in animals and humans, as well as in conventional meat. They stimulate protein synthesis in cells, resulting in increased muscle mass. They can therefore be rightly described by industry as “natural growth factors”. However, overexposure to them has established deleterious effects. In Europe, the use of growth hormones in agriculture has been prohibited since 1981 by directive 81/602. This ban was confirmed in 2003 by directive 2003/74 and validated by the European Food Safety Authority (EFSA) in 2007. What will the final concentration of these hormones be in cultured meat?

In addition, a growing number of studies have documented the toxicity of commonly used plastic products. Endocrine disruptors, compounds that can interfere with the hormone system and disrupt it, can be transferred from plastic packaging to food. Unsurprisingly, the same phenomenon has been documented in cell cultures grown in plastic containers by in vitro fertilization.

Unless the use of plastic in the production of meat by cell culture is tightly controlled, the meat could be contaminated with endocrine disruptors and other substances before it is even packaged.

Cultured meat is presented today as a high-tech product that has the potential to be both ecologically and morally responsible. But it can only become an alternative to traditional meat by conquering the world market – in other words, by being affordably priced for consumers and profitable for producers, and that requires high-volume, low-cost production techniques. Will the impacts on health and the environment still be taken into consideration with the transformation of the scale of production?

It’s also important to remember to that high consumption of meat is detrimental not only to the environment but also to human health. However, many consumers are not aware or decline to accept such conclusions.

To achieve a diet that is both sustainable and healthy, it is therefore essential to improve information and education to stimulate an informed debate on the crucial issue of meat consumption.