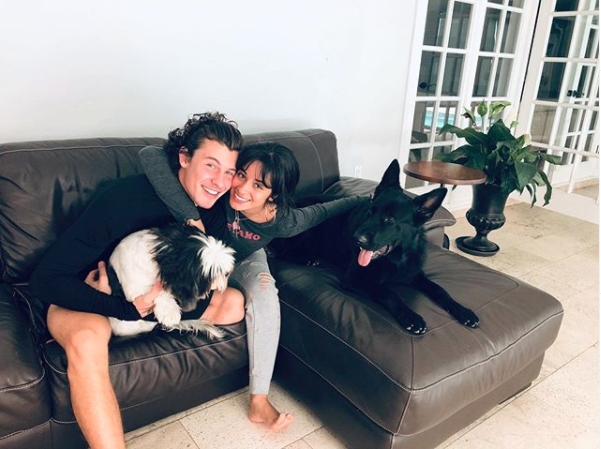 Camila Cabello and Shawn Mendes are not just quarantining together; they are also joining a protest together.

The Señorita singers were spotted joining a protest in Miami, one of those sparked in the wake of the death of 46-year-old black American George Floyd of Minneapolis.

They were seen walking together with other protesters. Both were holding a sign with Mendes' having the words Black Lives Matter.

Mendes was garbed in all black while Cabello had on a baggy distressed jeans topped with a shredded white shirt.

Both have also taken to their respective Instagram accounts to express their views on the Floyd incident.

Cabello urged her millions of followers to make a stand and sign any of the petitions pertaining to the Floyd incident and racial discrimination. She also listed several petitions that they can choose from.

Mendes, on the other hand, described how he felt while watching the footage of Floyd's arrest wherein he can be heard complaining that he cannot breathe.

The singer added that he could not imagine how it is to live a life constantly being discriminated against. He also said that while he realized that racism is a problem, he also accepts that he is a part of it and will do something to put an end to it.

The couple are not the only celebrities who have taken to the street to join the protest. Fellow singers Halsey and Ariana Grande have also been spotted in the protest in Los Angeles.

Floyd died an hour after he was taken to the hospital when he fell unconscious while being arrested.

The police were arresting Floyd due to a report made on 911 that he used a fake bill to buy cigarettes at a corner store.

While Floyd was lying on the ground, one of the white police officers, Derek Chauvin, forced his knee on the back of Floyd's neck and was seemingly deaf to Floyd's complaints that he cannot breathe.

Chauvin has since been dismissed from the service and is now facing murder charges.