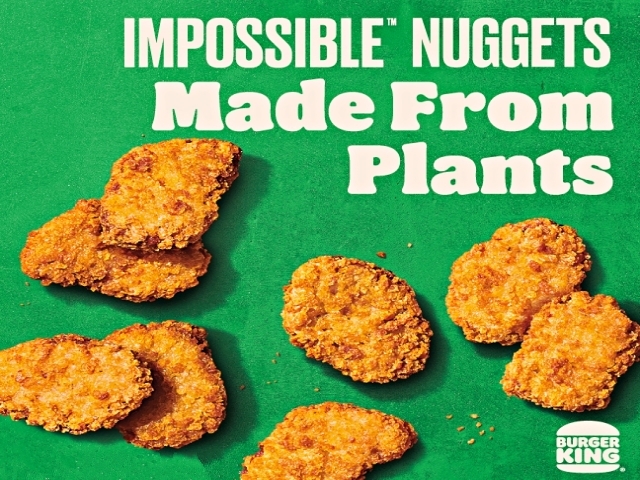 Burger King is now testing the plant-based chicken nuggets made by Impossible Foods in its select store outlets. With this, the fast-food headquartered in Miami, Florida, has become the very first restaurant chain to test out the new Impossible Foods’ vegan nuggets.

Burger King will have Impossible Foods’ chicken nugget alternative in its stores located in Miami, Des Moines, Iowa, and Boston. Customers will be able to buy this plant-based chicken product starting Monday next week.

As per CNBC, Restaurant Brands International, Burger King’s parent company, first teamed up with the Redwood City, California-based meat alternative manufacturer two years ago. This was the time when BK introduced its first “meatless” burgers.

The addition of the vegan burger option in the brand’s fast-food outlets was well-received, and the company slashed its prices so more people would buy them. BK now has its plant-based Whopper, and it has its own group of vegan followers.

Now Burger King is launching another “meatless” food option for its chicken nuggets which is one of the restaurant’s best-sellers as well. With the Impossible Chicken Nuggets, the company is hoping to have a similar successful response from its customers who now love its plant-based Whoppers.

“This isn’t the first time we have teamed up with Impossible to make waves in the industry,” Burger King’s chief marketing officer in North America, Ellie Doty, said in a press release. “In 2019, we became the first quick-service restaurant to serve the award-winning, plant-based Impossible patty and offer the iconic Impossible Whopper so it is only fitting we’re the first global QSR to test the Impossible Nuggets. We’re excited to hear what our guests in the test markets think of this latest innovation.”

At any rate, the Impossible Chicken Nuggets that will be tested out in the mentioned Burger King locations are made from plants and cooked in the same oil as the meat and cheese products. Chicken meat substitutes are rare compared to beef and pork, so the nuggets are expected to drive traffic in BK outlets.

Finally, in addition to the addition of the Impossible Nuggets in select branches, Burger King also announced it would be releasing the Ghost Pepper Chicken Nuggets, and this will be available across the country. Both products will be released on the same day next week.