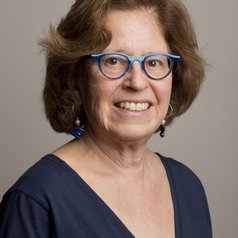 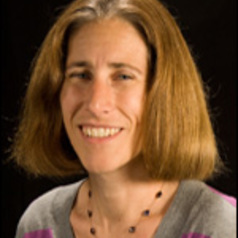 A recent court ruling about faraway American Samoa may have profound implications for a conflict that’s been going on for nearly 200 years: who gets to be an American citizen.

Debates over who gets citizenship and what kind of citizenship they get have always been intertwined with race in American history, as we have learned through our individual research on the historical status of Native Americans and African Americans and the research we have done together on restricting Chinese immigration.

Nonetheless, even in the highly racialized political environment of the late 19th century, the U.S. Supreme Court endorsed an expansive view of birthright citizenship – the idea that people born in a country are automatically citizens of that nation. In an 1898 ruling, the court decreed that the children of immigrants were citizens, regardless of their parents’ ancestry.

That decision laid the groundwork for the 21st-century ruling that people born in the U.S. Pacific island territory of American Samoa are U.S. citizens. If upheld on appeal, the ruling would overturn more than a century of federal policy, including congressional refusal to grant American Samoans citizenship status. 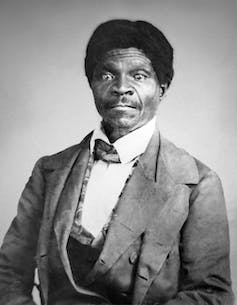 Dred Scott, around 1857, when he sued seeking freedom from slavery for himself, his wife and their two children. Wikimedia Commons

Federal laws govern some people’s citizenship – such as those who seek to be naturalized or people born overseas with at least one parent who is a U.S. citizen; the law says they, too, may claim U.S. citizenship. Similarly, children from other countries who are adopted by U.S. citizens become citizens themselves when the adoption is finalized.

But most citizens of the U.S. are born, not made. Before the Civil War, the U.S. had generally followed the English practice of granting citizenship to children born in the country.

In 1857, though, the Supreme Court had decided the Dred Scott v. Sandford case, with Chief Justice Roger Taney declaring that people of African descent living in the U.S. – whether free or enslaved, and regardless of where they were born – were not actually U.S. citizens.

After the Civil War, Congress explicitly rejected the Dred Scott decision, first by passing legislation reversing the ruling, and then by writing the 14th Amendment to the Constitution, which specified that “[a]ll persons born or naturalized in the United States, and subject to the jurisdiction thereof, are citizens of the United States and of the State wherein they reside.”

This broad language intentionally included more than just the people who had been freed from slavery at the end of the Civil War: Members of Congress discussed the potential inclusion of the children of other nonwhite groups, like Chinese immigrants and those identified as Gypsies. 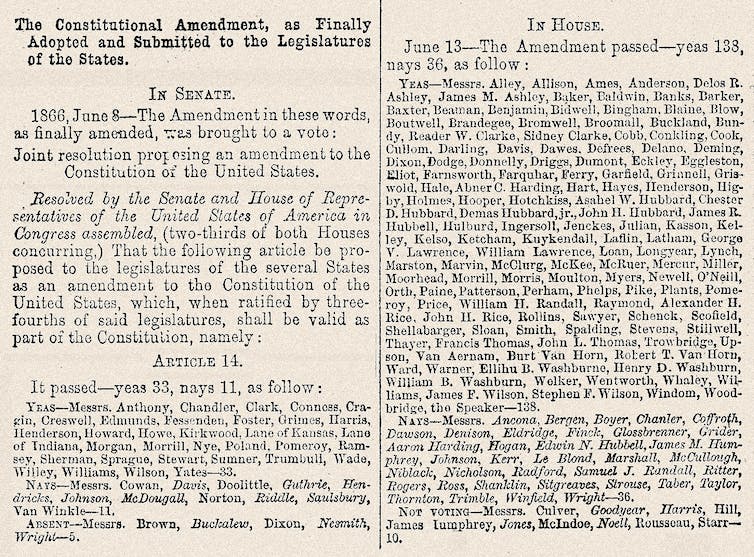 The Congressional Record shows the House and Senate votes on the 14th Amendment. Edward McPherson, Clerk of the House of Representatives of the United States/Wikimedia Commons

Still barring some from citizenship

However, this inclusive view of citizenship still had an area judges hadn’t made clear yet – the phrase “subject to the jurisdiction thereof.” In 1884, the Supreme Court had to interpret those words when deciding the case of a Native American who wanted to be a citizen, had renounced his tribal membership and attempted to register to vote.

The justices ruled that even though John Elk had been born in the U.S., he was born on a reservation as a member of a Native American tribe and was therefore subject to the tribe’s jurisdiction at his birth – not that of the United States. He was, they ruled, not a citizen.

In 1887, Congress did pass a law creating a path to citizenship for at least some Native Americans; it took until 1924 for all Native Americans born on U.S. soil to be recognized as citizens. 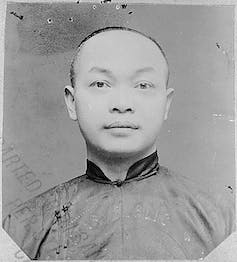 The text of the 14th Amendment also became an issue in the late 19th century, when Congress and the Supreme Court were deciding how to handle immigrants from China. An 1882 law had barred Chinese immigrants living in the U.S. from becoming naturalized citizens. A California circuit court, however, ruled in 1884 that these immigrants’ U.S.-born children were citizens.

In 1898, the Supreme Court took up the question in United States v. Wong Kim Ark, ultimately ruling that children born in the U.S. were, in the 14th Amendment’s terms, “subject to the jurisdiction” of the United States, so long as their parents were not serving in some official capacity as representatives of a foreign government. Therefore, those children were U.S. citizens at birth. 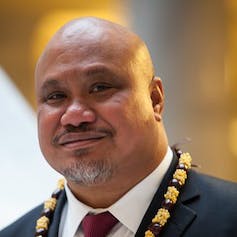 Since the Wong Kim Ark ruling, birthright citizenship rules haven’t changed much – but they are no less contentious. In 1900 and 1904, leaders of several Pacific islands that make up what is now American Samoa signed treaties granting the U.S. full powers and authority to govern them. These agreements, however, did not grant American Samoans citizenship. A State Department policy designates them as “non-citizen nationals,” which means they can freely live and work in the U.S., but cannot vote in state and federal elections.

Efforts to grant American Samoans citizenship in the 1930s passed the Senate but failed in the House. In 2018, plaintiffs from American Samoa sued, seeking to be regarded as full U.S. citizens. They asked a federal judge to decide whether they were covered by the 14th Amendment’s provision that they were born “within” the U.S., and therefore citizens. The judge agreed they were, looking to the Wong Kim Ark ruling as clear guidance that the 14th Amendment follows the ancient rule of birthright citizenship.

Policymakers and the public remain deeply interested in who gets citizenship and how they get it. President Donald Trump is just the latest in a long line of politicians who have objected to the fact that Latin American immigrants who come to the U.S. without legal permission can have babies who are U.S. citizens. Nevertheless, the courts have continued to uphold the centuries-long history of birthright citizenship, dating back to before the Constitution itself and early American court rulings.