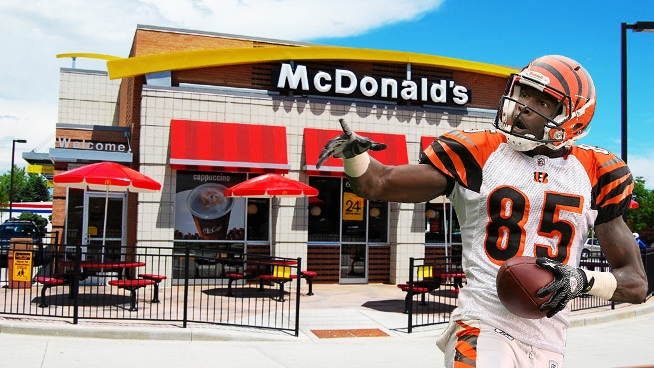 Johnson explained to Sports Illustrated’s Ashley Nicole Moss that the body needs to build a callous by eating whatever you want, including McDonald’s.

Ex-NFL wide receiver Chad Ochocinco Johnson credits McDonald’s for his clean bill of health over his 12-year career with the Bengals and Patriots while walking the red carpet at the Sports Illustrated Awards.

At the same time, Johnson blamed high-end places that force people to eat what they consider to be healthy as the reason why their bodies are breaking down.

Johnson explained to Sports Illustrated’s Ashley Nicole Moss that the body needs to build a callous by eating whatever you want, including McDonald’s.

He added that the success behind such players as Trevon Diggs and Micah Parsons, who are succeeding right now and haven’t been hurt, is McDonald’s.

He pointed out that he played for 12 years without getting hurt with his diet.

Johnson played the full 16 games seven times and never in fewer than the 12 in his rookie season.

According to Johnson, every first date he’s ever gone on has been in McDonald’s and has gotten their food delivered to the nightclub VIP area.