U.S. trade deficit narrows in June on rise in exports, data likely to be better in August

Gold steadies above $1,900 on weaker dollar 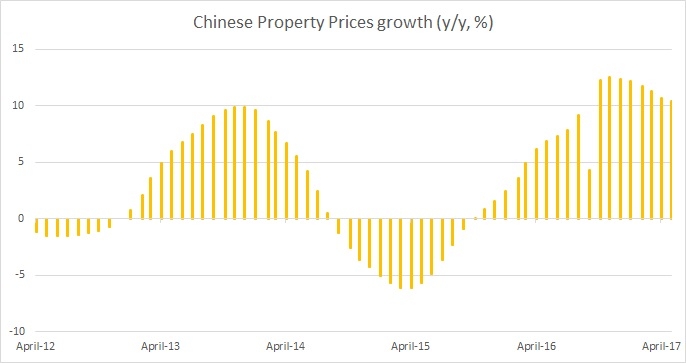 The price to purchase a new house in China’s major cities cooled further in May as the year on year growth declined for the six consecutive months. The year on year growth decorated for the sixth consecutive month since its peak in November, when it grew by 12.6 percent. In May, growth was 10.4 percent. Improvement in short-term price trends stalled after three months of acceleration, with average housing prices up 0.7 percent month on month in May, unchanged from April.

In monthly terms, average prices grew in 56 of the 70 cities surveyed. In April, prices grew in 62 cities. Prices fell in 9 cities in May and in five cities they were unchanged. Major cities saw growth inch lower, according to a data issued by the statistics bureau. Month-on-month prices in those cities moderated from a rise of 0.1 percent in April to a growth of just below 0.05 percent in May. In year-on-year terms price growth for most major cities slowed as well. It is, however, still growing in the double digits for all but Shenzhen. Beijing new home prices grew 14.6 percent year on year, down from 17.4 percent in April. A straight average for the 15 listed top-tier cities dropped almost 3 percentage points to annualized growth of 16.2 percent.

This comes as a clear evidence of a further slowdown in the Chinese property market and instills fears of the past when it suffered severe downturn resulting in broader economic turmoil.