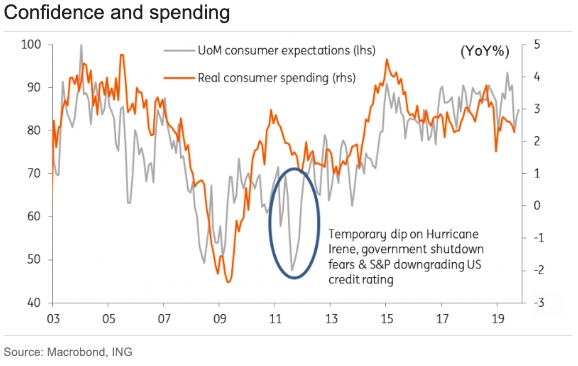 Plunging inflation expectations in the United States at a time of weakness in business surveys suggests the Fed will cut interest rates again in October, according to a recent research report from ING Economics.

US consumer confidence improved in October, suggesting households still have an appetite to spend. The recent run of US economic data has been poor. The ISM manufacturing and non-manufacturing series are in freefall, the National Federation of Independent Business (NFIB) small business series is in its worst position since Donald Trump became President and employment and wage growth appear to be stalling.

Despite that, the consumer remains upbeat with the University of Michigan consumer sentiment index rising to a three month high versus expectations that it would post another decline.

The current conditions component rose to a ten-month high of 113.4 from 108.5, which seemingly reflects an improvement in the perception of net incomes and household finances in general.

Certainly, with unemployment near multi-decade lows and wages having picked up over the middle of the year, these components should be in decent shape. However, the expectations component, which is a more useful index given its correlation with consumer spending, saw more muted gains, the report added.

It rose to 84.8 from 83.4, but is still well below its 2-year average of 87.3. Nonetheless, this is still a respectable level that has historically been consistent with real consumer spending growth of around 2.5-3 percent.

"Unfortunately this expectations index hasn't been such a great lead indicator over the past year or so - if it was then we should have been experiencing real consumer spending growth of nearly 4 percent rather than the 2 percent and a bit percent we are likely to get for full year 2019," ING Economics further commented in the report.

Consequently, given the weakness in business surveys today's confidence reading is unlikely to hold much sway at a Federal Reserve that has a bias to ease monetary policy further.

Moreover, the consumer inflation expectations series has hit an all-time low of 2.2 percent looking over a 5-10 year horizon while on a 1-year horizon it has fallen to 2.5 percent from 2.8 percent. With market-based measures of inflation (using Treasury Inflation Protected Securities) also at rock bottom levels (around 1.5 percent) this will make the Federal Reserve nervous about hitting their inflation target over the medium term.

As such this may be the more significant story in this report and should help nudge October rate cut expectations even higher.