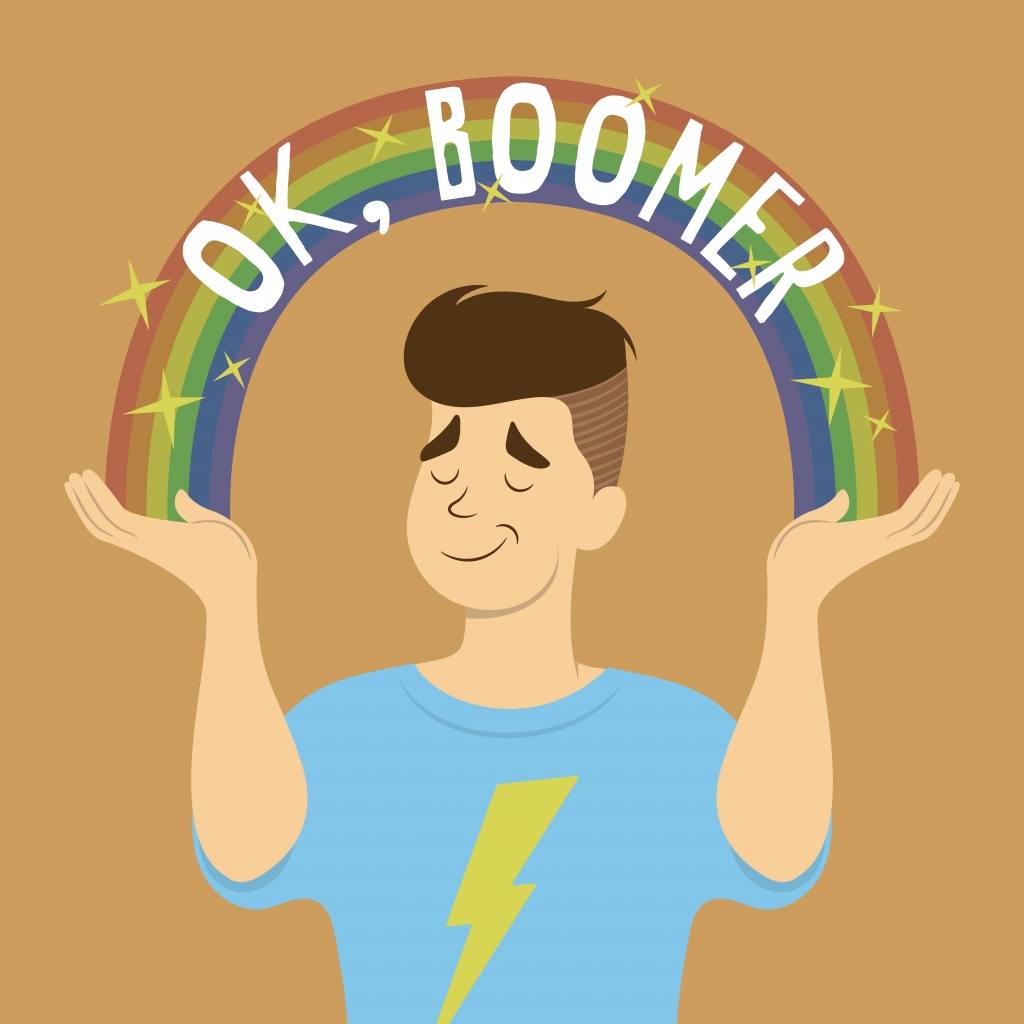 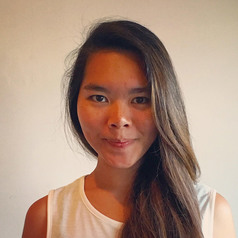 The phrase “OK Boomer” has become popular over the past two years as an all-purpose retort with which young people dismiss their elders for being “old-fashioned”.

“OK Boomer” began as a meme in TikTok videos, but our research shows the catchphrase has become much more. The simple two-word phrase is used to express personal politics and at the same time consolidate an awareness of intergenerational politics, in which Gen Z are coming to see themselves as a cohort with shared interests.

What does ‘OK Boomer’ mean?

The viral growth of the “OK Boomer” meme on social media can be traced to Gen Z musician @peterkuli’s remix OK Boomer, which he uploaded to TikTok in October 2019. The song was widely adopted in meme creations by his Gen Z peers, who call themselves “Zoomers” (the Gen Z cohort born in 1997-2012).

In the two-minute sound clip @peterkuli distilled an already-popular sentiment into a two-word phrase, accusing “Boomers” (those born during the 1946–64 postwar baby boom) of being condescending, being racist and supporting Donald Trump, who was then US president.

In essence, the “OK Boomer” meme emerged as a shorthand for Gen Z to push back against accusations of being a “fragile” generation unable to deal with hardship. But it has evolved into an all-purpose retort to older generations – but especially Boomers – when they dispense viewpoints perceived as presumptive, condescending or politically incorrect.

The meme arose in a wider context of “Boomer blaming”. In this view, the older generation has bequeathed Gen Z a host of societal issues, from Brexit and Trump to intergenerational economic inequality and climate change.

From ‘big P’ politics to ‘everyday politics’ and ‘intergenerational politics’

In our recent study on forms of online activism and advocacy on TikTok, we looked at 1,755 “OK Boomer” posts from 2019 and 2020 and found young people used the meme to engage in “everyday politics”.

Unlike “big P” politics – the work of governments, parliaments and politicians – “everyday politics” are political interests, pursuits and discussions framed through personal experiences.

On TikTok, young people construct and communicate their “everyday politics” by displaying their personal identities in highly personable ways, to demonstrate solidarity with or challenge beliefs and principles in society.

The “OK Boomer” meme and others like it allow young people to partake in a form of “intergenerational politics”. This is the tendency for people from a particular age cohort to form a shared political consciousness and behaviours, usually in opposition to the political attitudes of other groups. This is also reminiscent of when Boomers themselves encountered their own intergenerational politics in the countercultures of the 1960s and 1970s.

On TikTok, political expression can take the form of viral dances and audio memes. Young people use youthful parlance and lingo, pop cultural references and emojis to shape their collective political culture. In our study, we found three meme forms were especially popular: 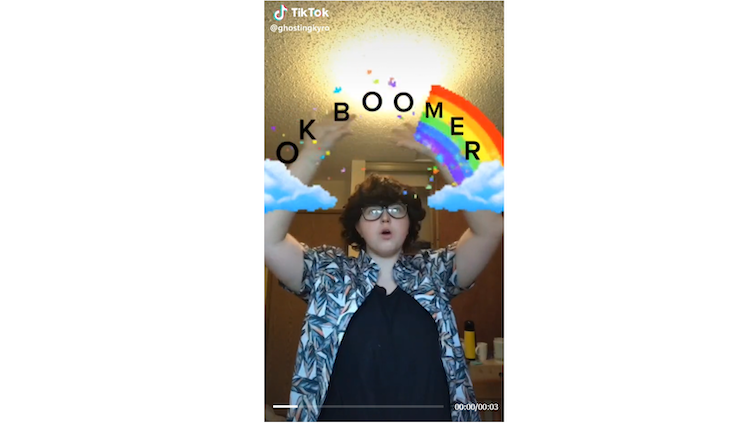 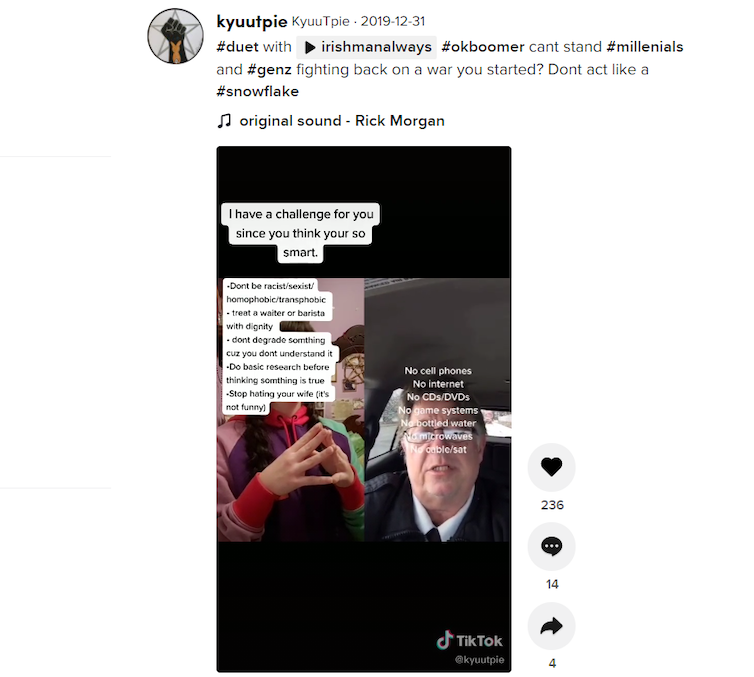 ‘React via duet’: @kyuutpie’s duet to @irishmanalways who had challenged Gen Z to not use technologies. 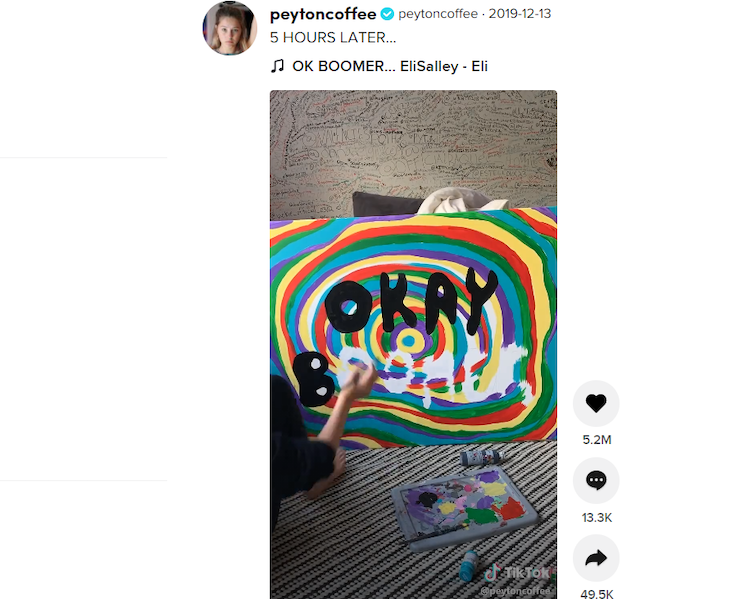 Memes have been used as collective symbols for community identification around specific political causes such as human rights advocacy, the #MeToo movement, and anti-racism campaigns during the pandemic.

Similarly, the “OK Boomer” meme has been deployed to discuss various controversial and contentious issues. This is often done in a reflexive way, using self-deprecating memes and ironic self-criticism to parody the excessively judgemental behaviour of others.

Around 40% of the posts we examined focused on young people’s lifestyles and well-being. These posts detailed how Gen Z are often criticised by Boomers for their lifestyle and appearance choices, such as unconventional career pathways and wearing ripped jeans.

Gen Z TikTokers also expressed frustration towards the dismissive attitude that Boomers adopted towards their mental health. These posts suggest Boomers blame depression or anxiety on stereotypical causes such as “spending too much time on the phone” or “not drinking enough water”. 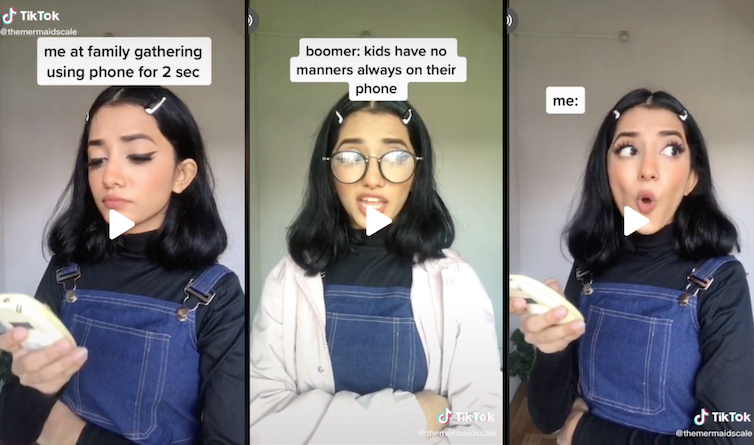 Unreasonable criticism from Boomers is a common them in videos such as this one from @themermaidscale.

About 10% of our sample demonstrated issues around gender and sexuality norms. In these cases, Gen Z felt their identity explorations and expressions were criticised by Boomers. Non-binary young people and those who did not follow gender norms for dress describe being “dress-coded” by Boomers, and queer and transgender young people report receiving rebukes for being open about their sexuality. 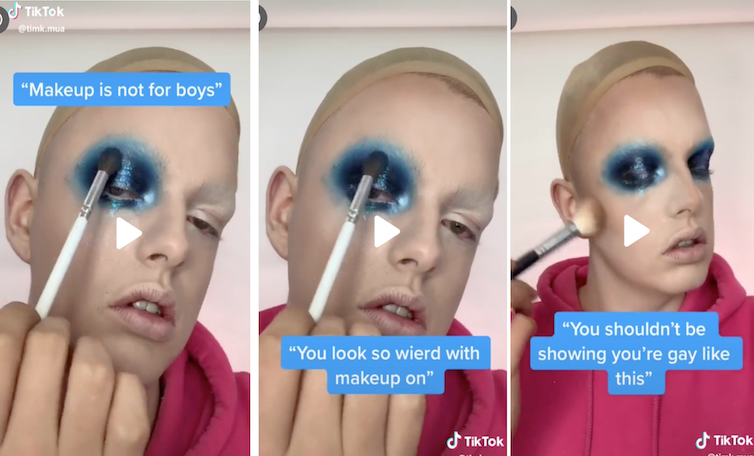 Gender and sexuality are a common topic for #OkBoomer videos, such as this one from @timk.mua.

Why do ‘OK Boomer’ memes matter?

Some scholars and commentators have criticised the “OK Boomer” meme as divisive and discriminatory against older people. However, as scholars of young people’s digital cultures we have found it more productive to understand the trend from the standpoint of Gen Z.

From this viewpoint, “OK Boomer” is a consequence of existing intergenerational discord, not its cause. Gen Z face growing threats such as climate change, political unrest, and generational economic hardship. Memes like “OK Boomer” are ways to express intergenerational everyday politics to consolidate a shared awareness of the perceived failure of the Boomers.

Further, most of the personal stories told through “OK Boomer” TikToks were deployed by Gen Z when they felt under attack for their lifestyle choices, dress code, expressions of sexuality, or mental health struggles. Like many Boomers did in their own youths, members of Gen Z value freedom of expression and identity exploration.

The retort of “OK Boomer” offers a counter-reaction and expresses indignation. But at the same time it carries a sense of desperation for agency and personal space, as well as some attention and care.

Meg Jing Zeng does not work for, consult, own shares in or receive funding from any company or organisation that would benefit from this article, and has disclosed no relevant affiliations beyond their academic appointment.