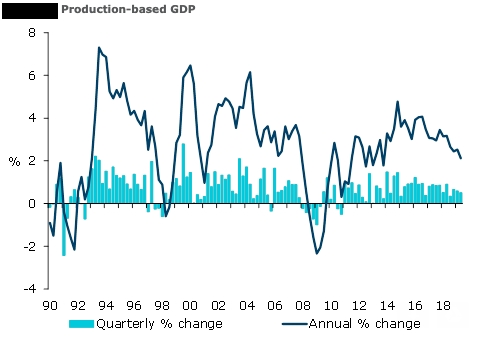 The New Zealand economy grew 0.5 percent q/q in three months to June 2019, a touch stronger than the 0.4 percent pencilled in by ANZ Research. The small positive surprise means annual growth has been running a touch stronger than thought (2.1 percent in Q2 compared to 2.0 percent expected), but the broader story of slowing momentum remains fully intact.

Today’s print was in line with the RBNZ’s May MPS forecast for growth of 0.5 percent q/q, but was a little stronger in annual growth terms (they also expected 2.0 percent y/y). However, Q2 GDP was never going to be the litmus test for the OCR outlook.

The forward-looking indicators matter more for the RBNZ, and they suggest momentum will continue to soften over the second half of the year and into 2020 – rather than turn a corner and begin lifting from now, as per the RBNZ’s August MPS forecasts. Another downgrade to the RBNZ’s growth outlook is on the cards at the November MPS.

That said, looking through the quarterly volatility, the easing trend in annual services growth remains firmly in place, with it slipping from over 4 percent in 2016 to just 2.4 percent in Q2. There were a few overs and unders in terms of the underlying components, but nothing to challenge the overall narrative. Retail trade was a touch stronger than expected, but wholesale trade was weaker, the report added.

The nominal economy grew a solid 1.9 percent q/q – faster than we had expected and well above its real counterpart. At face value, this points to higher pricing pressures across the broader economy, including the recent lift in the terms of trade. However, there isn’t a strong correlation between the GDP deflator and CPI inflation.

"While we’re not expecting growth to roll over (our forecasts are for annual growth to bottom out at a little below 2 percent in Q1 2020), we do think inflation pressures will wane in this environment. We expect the RBNZ will use the tools it has available to lean against that (and keep inflation expectations from deteriorating significantly). We have pencilled in 25bp cuts in for November, February and May, taking the OCR to just 0.25 percent," ANZ research further commented in the report.