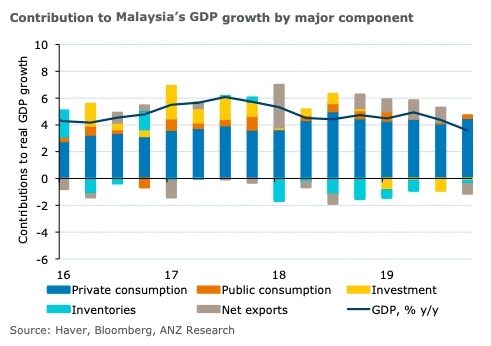 Malaysia recorded the weakest growth of 3.6 percent y/y in a decade during the last quarter of 2019, primarily owing to weak external demand. With the Malaysian economy facing myriad headwinds, including lower tourism income and demand for commodities, an improvement in growth is unlikely, at least until Q2 2020, ANZ Research reported.

Exports, which fell 3.1 percent y/y (Q3 19: -1.4 percent y/y), were the singular reason for the under-performance of overall GDP growth. Weakness in both technology products and commodities contributed to the bulk of the weakness. Although imports also contracted, net trade made a negative contribution of 0.7 percent to overall growth. This contrasts with a positive contribution of 1.0 percent in Q3 19.

By contrast, domestic demand held up well. Private consumption picked up to 8.1 percent in Q4 (Q3: 7.0 percent y/y), anchoring overall growth. A combination of factors including the delay in adjustment in the fuel subsidy mechanism and the steady to modestly higher labour force participation rate likely helped, the report added.

Investment activity improved to -0.7 percent y/y (Q3: -3.7 percent), lowering its drag on GDP growth from -0.9ppt previously to -0.2ppt in Q4. On the supply side, services growth accelerated to 6.1 percent in Q4 from 5.9 percent in Q3 in line with higher consumption activity.

Importantly, agricultural activity deteriorated sharply to -5.7 percent y/y in the quarter (Q3: 3.7 percent y/y) because of weakness in the palm oil sector. Manufacturing was also weak in tandem with the performance of exports.

"Weaker-than-expected Q4 numbers add further context to BNM’s surprise policy rate cut in January. The rate cut should serve to guard against downside risks to growth. At this stage, we cannot rule out another policy rate cut if economic conditions worsen. It is also conceivable that the government may consider front-loading its 2020 budgeted spending."