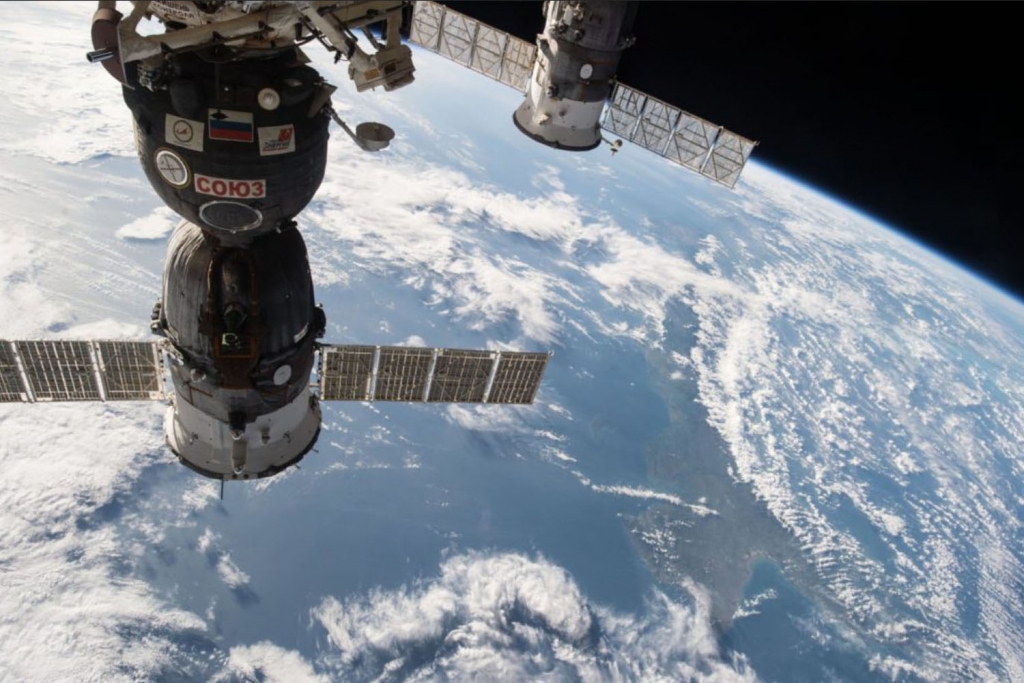 A photo taken from the International Space Station in 2014 shows the Soyuz TMA-15M spacecraft on the left and the unpiloted ISS Progress 57 cargo craft. Six years later, private players have joined the space race. Picryl

The attention of the world has recently been captured by the return of Japan’s Hayabusa-2 asteroid mission, the activities of Elon Musk’s SpaceX venture, and China’s Chang'e 5 moon landing, yet a quiet revolution is taking place in the global space industry. This revolution started in the 2010s and its full impact on global space industry should be measured over the next decade.

In the next 10 years, the entry into service of constellations of small satellites should reshape the face of the global space industry. While the miniaturization of satellites is not a disruptive innovation in itself, it signals a paradigm shift. It will continue to significantly reduce the cost of access to space and pave the way for the mass production of satellites, which in turn will reduce the cost of the space infrastructure itself.

The space industry used to be organized in highly hierarchical industrial chains around prime contractors, most often under public leadership, NASA being a leading example. It now operates like industrial ecosystems budding upstream or downstream around private space infrastructure.

This industrial change is taking place in an institutional context dominated by a lasting crisis in international governance of space activities. The creation of an international civil space organization (ICSO) is not currently conceivable, but with the arrival of President-elect Joe Biden, we should expect the return of the United States to a more consensual diplomacy. However, the United States is likely to continue leading the game with the Artemis Agreements. They propose an intelligent rereading – albeit favorable to US interests and current American industrial supremacy – of the principles contained in the Outer Space Treaty signed at the end of the 1960s.

While only nine states have currently signed the agreement, this could increase if the EU collectively takes a position and suggests an alternative, which could lead to a reciprocity agreement. In this regard, the idea of a Space Market Act should be supported, along the lines of the two recently announced regulations: the Digital Services Act and the Digital Market Act.

In the meantime, international attention should continue to focus on the issue of space debris, and it will certainly be necessary to move quickly far beyond current management efforts. A useful lead could result from a transposition of the experience of the salvage clauses in the field of maritime insurance to space insurance law.

In the coming years, the space industrial ecosystem will be dominated by the question of spatially derived data. The launch of constellations of small satellites will increase the volume of data produced, whether it is concerning the Earth or space itself. These data will need to be processed, and from this processing will result numerous commercial services being offered.

This accumulation of spatially derived data could be disruptive. Some governments will seek to protect their satellites or space platforms by setting up keep-out zones (more diplomatically referred to as “safety zones”). Others, such as EU member states, will be more attentive to the data’s personal nature, or to the limits that the collection and processing of these data may bring to the sovereignty of states, including the risk of anti-competitive behavior.

These big data flows have the potential to attract a range of industrial players who will implement techniques from Silicon Valley such as MVP (minimum viable product. The technique makes it possible to market a product (good or service) that is not yet fully finished, while collecting information from its users that will make it possible to improve it.

The multiplication of these private operators should maintain an important flow of financial transactions: fund-raising in the different series, acquisitions, calls to the financial markets with or without special purpose acquisition company (SPAC). The question of such companies’ growth strategy will certainly arise: internal growth by strengthening or diversifying their activities or external growth by acquisition. Acquisitions are likely to prevail and market concentration is likely to rise. This should raise the growing question of the compatibility of vertically integrated players with competition rules.

Defense should remain an important customer of the space-imagery industry and should contribute its growth through multiple initiatives (financing, public procurement, calls for tenders). While this mono-customer situation has advantages, it may reduce the prospects and durability of this industry.

The market for commercial space applications should attract a clientele that demands high-quality services, particularly their performance. The arrival of the first constellations of small satellites also offers immense potential for services provided in orbit (refueling, observation, maintenance). More traditional sectors of the space industry should emerge transformed, starting with the space-insurance industry, which will not be able to ignore the resilience rates of the announced constellations. These rates should increase the need of inspection missions carried out.

Terrestrial infrastructure development, particularly those of 5G, should not be seen as a competitor but rather as a complement to the services provided by small satellite constellations.

The space industry cannot remain a long-term stranger to the phenomenon observed in recent years of a shift in value-added, toward content providers and more generally, the ICT industry. Convergence between the two industries will be found or will have to be found. The great challenge that awaits all operators of terrestrial or satellite infrastructures should be that of IoT.

Following in the wake of the GPS and small-satellite revolution, the shift to electric vehicles should bring with it the “dashboard challenge” – being able to guide vehicles’ automatic driving and on-board services. Powerful industrial alliances, following the example of Software Alliance for E-mobility (SAFE), LEAF or Charge-Up Europe, will certainly be necessary between space and terrestrial, modern and more traditional industries, as they have begun to be under GNSS Escape (European Safety Critical Applications Positioning Engine) program.