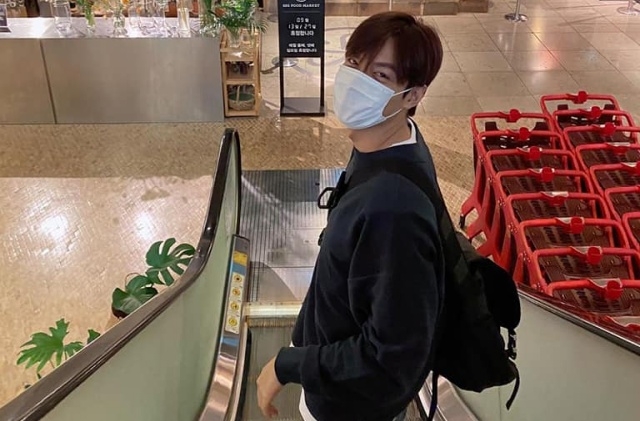 Lee Min Ho recently tried to shop at the supermarket but his attempt turned out to be an epic fail experience. Many people will be able to relate to what happened to the heartthrob when he visited the food market the past weekend.

The 33-year-old star of “The King: The Eternal Monarch” shared his experience on social media and many fans find it cute. While he surely felt very disappointed, fans find his reactions really cute. His supporters were able to get a glimpse of what exactly happened to him when he shared photos of the incident on Sept. 13.

In his social media post, Lee Min Ho let his followers know that he went to the market on Sunday. The first photo showed him inside a building and walking to the direction of the mart then he stopped by a table near the escalator to disinfect his hands which is a common protocol today due to COVID-19.

He then rode the escalator going down and finally reached the SSG Food Market, however, it was empty. No one is around and Lee Min Ho surely looks disappointed after learning it is actually close.

The actor also took a photo of the sign that says the store is close that day. It will be open next Sunday but will be close again on the 27th. As it turned out, closing a store for a day is common in South Korea to give the employees a break. And unfortunately, Lee Min Ho might have forgotten about this schedule.

The star captioned his hilarious “adventure” with just “OMG” and this cracked up the fans. Many said that this happened to them all the time too and others wished Lee Min Ho luck on his next trip to the food market.

The actor’s next activity

Meanwhile, after completing and successfully making his comeback via “The King: The Eternal Monarch,” Lee Min Ho or his management agency, MYM Entertainment, has not announced any new project yet. But while there is no news about his activities, it seems that he is working on something.

Some of his followers are convinced, he will be in a new drama or movie soon because, in one of his IG updates, he posted a photo of himself in front of a small monitor. It appears that he was checking out how his “scene” turned out. There is also a document that looks like a script on the table. But then again, this can only be confirmed if his agency releases a statement regarding his new projects.