Krispy Kreme releases the new 'Carnival Collection' for the summer 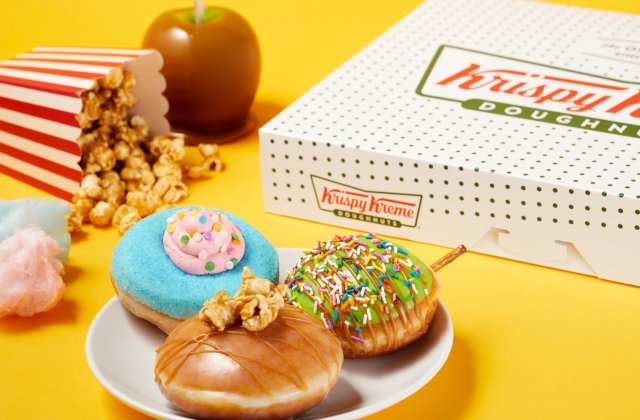 Krispy Kreme, the American doughnut company and coffeehouse chain, is offering new flavors after its initial public offering. It was said that the store came up with limited-edition treats, and they are colorful and festive.

Krispy Kreme, which is also known to release unique doughnut flavors for a limited time, has once again created treats that are delectable and perfect for the season. This time, the 84-year-old world-famous doughnut maker is offering carnival-inspired doughnuts for the season.

Krispy Kreme announced three new flavors in its Carnival Collection, and these will be in stores starting Monday, July 19. Customers can buy the caramel apple, cotton candy, and caramel popcorn donut flavors from participating Krispy Kreme outlets across the United States and Canada.

As per Fox Business, the caramel apple features an apple-flavored cream filling and green icing. It is completed with pretzel sticks and rainbow sprinkles on top and is said to be 370 calories.

The cotton candy donut has lower calories which are just 300. It is the regular glazed donut that is topped with candy-flavored icing, buttercream, and rainbow sprinkles.

“Carnivals are a summertime tradition, and whether yours has returned or not after a year off, you can get a taste of your favorite fair flavors with these delicious new doughnuts,” Krispy Kreme chief marketing officer, Dave Skena, said in a press release as he explains the idea for the new flavors and theme.

The three Krispy Kreme donuts are already out, but they will be available for a limited time only. Based on the announcement, customers can have these carnival flavors until Aug. 8.

Also, it should be noted that only participating Krispy Kreme outlets in the U.S. and Canada are offering the three festive donuts for this summer. Meanwhile, the company’s second IPO was valued at $17 on NASDAQ at the beginning of this month, and this comes after almost five years since KP delisted itself.