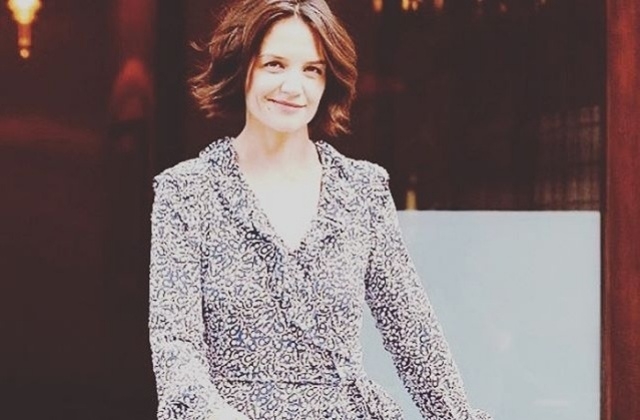 Katie Holmes is in a relationship now, a year after breaking up with Jamie Foxx. Her new beau is younger than her and was identified to be an Italian chef named Emilio Vitolo Jr. He is also the son of a famous restaurateur who owns a dining place in SoHo.

Katie Holmes was confirmed to be back in the dating game not because of interviews or anything but it was through public display of affection. She got hot and heavy with her 33-year-old boyfriend after dining together at Peasant Restaurant in Manhattan early this month.

A very public reveal of her new relationship

Many were shocked by her photos where she was seen sitting on Emilio’s lap and other times they were making out in plain view of the other diners. A series of their photos were published on the Daily Mail and it was so new because the “Dawson’s Creek” star was known to be a very private person especially when it comes to her dating life.

In fact, she managed to keep her relationship with Jamie Foxx very private in the span of six years that they were together. They didn’t publicly admit it and only appeared together just weeks before they split up last year.

This is why the 41-year-old actress’ PDA with her new beau really caught many people off guard. Katie Holmes and Emilio even kissed in the open so it is obvious that there is no intention of hiding their romance.

Now, it was reported by New Idea that while Katie Holmes appeared to be really smitten with her younger boyfriend, it was alleged that she will experience a heartbreak soon. This is because Emilio was only “taking her for a ride.”

A source claimed that the chef is very ambitious and wants to be an actor. He has some experience but seeing that he broke up with his fiancee just before dating Katie Holmes, it was suggested that he could be trying to ride on her popularity to advance his career in acting.

“He’s such a celebrity hanger-on, a real kind of name-dropping show-off,” the source supposedly told the magazine. “He craves fame, so he’s like the cat who got the cream.”

With this, Katie Holmes’ friends are said to be worried about her. This is because he may ditch her at some point.

“Everyone’s shocked that she would be all over this guy in such a public place,” the tipster went on to say. “After hiding undercover with Jamie Foxx for so many years, it’s really not like her.”

In any case, this is just a rumor since New Idea did not provide hard evidence so it can’t be considered as truth. Plus, the source was not named so his or her words could not be confirmed.