KARIMA BALOCH: FINGERS POINT AT FOUL PLAY – BY WHOM? 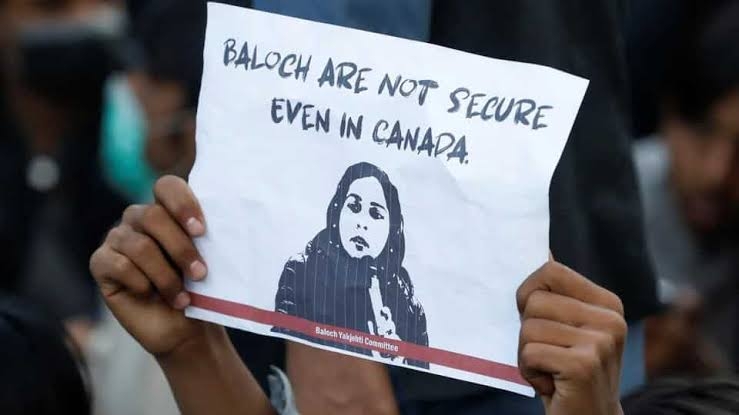 As protest demonstrations continue in Canada, Britain and of course, Pakistan, concern is expressed about a possible foul-play in the death of Karima Baloch, Pakistani activist from Balochistan living in self-exile, whose body was discovered on Toronto Island on December 20.

Fingers point to a possible foul-play that the Canadian Police is either unwilling or unable to detect, having declared at the outset that this was a case of suicide. The protesters are asking: How could a spirited, young woman drown in the frozen river in winter-time Canada?

But much more than this is the murder angle and reluctance of the police in Toronto to probe this angle, despite repeated pleas from Baloch’s family, friends and other activists who have fled from Pakistan. They all stress that Karima, an activist for Baloch rights at home, was already pursued before she fled the country in 2015 by the intelligence agencies, especially the Pakistan Army’s all-powerful ISI.

They cite the record of successive governments of eliminating dissidents and even high profile politicos unwanted by the government of the day, not just while they are in the country, but also after they leave, at time to seek asylum or refuge.

Karima left her Toronto home on December 20, alone, and was traced to Toronto Central Island, where her belongings and her dead body were found. In just about 24 hours, police investigators called it a death by suicide that, critics on the mainstream and social media say, is unlike the procedures generally followed in such cases.

Karima’s husband, Hammal Baloch, also a Pakistani human rights activist living in Toronto, told British newspaper The Guardian (December 22,2020) “I can’t believe that it’s an act of suicide. She was a strong lady and she left home in a good mood,” Haider said. “We can’t rule out foul play as she has been under threats. She left Pakistan as her home was raided more than twice. Her uncle was killed. She was threatened to leave activism and political activities but she did not and fled to Canada.”

Haider, who just joined her in Canada weeks ago, says she was “an immensely courageous person.”

He told CityNews of Toronto (December 22): “Her work as an internationally prominent activist speaks for itself … I believe it’s our right to request the Canadian authorities to leave no stone unturned in looking into the circumstances of her death as well as the threats she had been facing since moving to the country.”

Sameer Mehrab, Karima’s brother, says the police says it has found “no evidence” of a possible foul-play, despite being warned, even before Karima’s death of the threat to her life.

Sameer told The Canadian Press news agency (December 23, 2020) that he had “no evidence” of any foul play, but going by the past and recent records, there was much that the Toronto police could factor into their investigations.

The same day, Kiran Naazish, a former war correspondent who has covered the Middle East and South Asia, currently a professor at Brandon University and the founding director of

The Coalition For Women In Journalism, wrote a hard-hitting. Yet persuasive opinion piece in Globe & Mail newspaper.

She recalled that in April this year, Sajid Hussain Baloch – an activist and journalist who reported on Pakistan’s human rights violations and had sought asylum in Sweden – “was found dead in a river just outside Uppsala. Karima’s body was also found near water, adding further concern to the circumstances surrounding her death.”

Given the unusual circumstances and Karima’s controversial work, this quick decision (of Toronto Police), she said, “seems irresponsible.”

“After all, she has long been harassed by Pakistani authorities, even during her asylum process here in Canada. She told me that she had received threats to end the process to leave for Canada, and her mother back home was told by the intelligence agencies in Pakistan that if Karima does not return, her uncle would be killed”, Kiran wrote.

In the past few months, Karima had told me about the various threats she has been receiving from what she believed to be Pakistani intelligence agencies. The most recent of which alluded to receiving a “present on Christmas.” As a journalist who has covered the human rights violations in Balochistan in Pakistan closely, I know this is typical of how Pakistani intelligence agencies send threats to Baloch dissidents.”

Kiran Naazish stressed that Canada as a country that valued democracy and dissent hosted many activists in trouble in their own countries. But this laudable task and responsibility did not end with merely granting of visas. The state must ensure safety and security of these people.

Protests and writings in Canada are not just confined to expatriates from Pakistan. CityNews, another Toronto newspaper (December 22, 2020) reported a demonstration outside Toronto Police Headquarters seeking “a formal investigation”

Karima’s sister Mahaganj told BBC Urdu Service Mehrab’s sister told BBC Urdu on Tuesday that her death was “not only a tragedy for the family, but also for the Baloch national movement. She didn’t go abroad because she wanted to, but because… open activism in Pakistan had become impossible.”

Reportage and rights bodies from across the world have raised concerns. At the news of her death, Amnesty International South Asia tweeted on December 22: “The death of activist #KarimaBaloch in Toronto, Canada is deeply shocking and must be immediately and effectively investigated. The perpetrators must be brought to justice.”

The Pakistan High Commission, on its part, in Ottawa has sought more information from the Canadian authorities and have condoled Karima’s death. Media in Pakistan have lapped up the Canadian police version, but not protests.

The Amsterdam-based think-tank, European Foundation for South Asian Studies (EFSAS) said on December 25 that Karima’s “killing is a dangerous trend that urgently needs to be arrested.”

“This community (of Pakistani refugees) now finds itself under attack from unseen assailants, and has begun to question the fate that awaits them when even their first world hosts seem unable or worse, still disinterested, in assuring them the right to life, the most basic of all rights, that they already had the misfortune of losing once afore in their homeland.”

Critical of the Canadian authorities’ approach, the Foundation said: “The effort to brush the cause of Krima’s death under the carpet, as appears to be happening at the moment, has not only put this dissident expatriate Pakistani community sheltering across the western

world on tenterhooks, but has also raised the weighty question worthy of serious consideration.”

Taha Siddiqui, a Pakistani dissident based in France has joined the chorus of voices that point the finger at Pakistan’s military establishment.

To take in the larger picture of the role this establishment working with successive governments, one needs to see an old report in The News International (February 12, 2013) that listed “dozens of high-profile Pakistanis”, unwanted by the government of the day, be it civil or military. Leaving out non-political entities, only some, like former prime ministers, governor generals and the likes are being culled out from that list as below:

Huseyn Shaheed Suharavardy, Pakistan’s prime minister during 1955-57 was considered “security risk” by President Ayub Khan who got him disqualified from conducting politics. He died under what reports in 1963 said, “mysterious circumstances.”

Iskander Mirza, Pakistan’s governor general, Ghulam Mustafa Jatoi and Mohammed Khan Junejo, a civilian prime minister under a military government, once no longer of any use, both died when abroad under circumstances that were never convincingly explained.

The Bhutto family has been the worst sufferer. Begum Nusrat Bhutto (1929-2011) the wife of the 9th Prime Minister Zulfikar Ali Bhutto (who had also been the country’s President), had fallen out with daughter Benazir and went into exile in Dubai. She lived the last few years of her life there and eventually died on the ventilator in2011 of the combined effects of a stroke and Alzheimer’s disease.

Both of Benazir’s brothers, Mir Murtaza and Shahnawaz were in exile when they met with unnatural deaths. Murtaza was gunned down and Shahnawaz was reported to have been poisoned by his wife.

Imran Farooq, a politician hailing from the Muttahida Qaumi Movement (MQM), was living in self-imposed exile in London when he was killed, allegedly due to infighting within the party. Pakistan Government spent huge sums to get fugitive MQM supremo Altaf Husain for the murder, the legality of which was questioned by the government auditors only last month.

Deaths of Balochs, and other dissidents seem natural in corollary of the way Pakistan is run.

This 2013 list has only lengthened in the last eight years. When, if at all, deaths of Karima and other activists will be added to that list is uncertain, given the role of the intelligence agencies, both civil and military, in Pakistan that is often described as “security state.”