George Clooney, Amal Alamuddin are not renewing marriage vows; Couple is not playing cupid for Brad Pitt and Jennifer Aniston 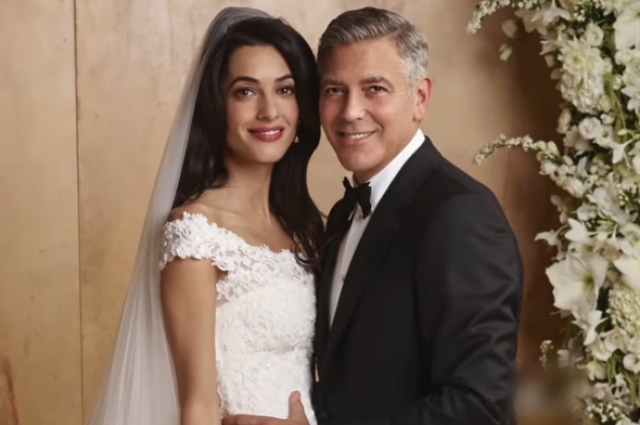 George Clooney and Amal Alamuddin are celebrating their fifth wedding anniversary soon but contrary to the reports, they are not marking the day with a renewal of their vows. The couple does not have plans of playing cupid for Jennifer Aniston and Brad Pitt so they can reunite once again.

Renewal of vows for a wedding anniversary?

According to Heat, the Clooneys want to invite their friends to their home in Los Angeles to celebrate their wedding anniversary. It was alleged that a renewal of vows is being prepared and they are also hoping that the occasion will be the perfect place for Aniston and Pitt to reconcile as a couple.

The tipster said that he wants everyone in this celebration because on his wedding four years ago, many of his A-list friends did not make it to Italy where the nuptials took place. Now he wants his closest pals to be able to attend including Brad Pitt, Jennifer Aniston, Julia Roberts and Sandra Bullock.

The source further alleged that Clooney knows that his friends will all come this time because all of them live just down the street. They are all Hollywood celebrities and living in the same neighborhood anyway.

Another purpose of the event is to bring Jen and Brad together?

The source also relayed that George Clooney and Amal Alamuddin have another purpose for their renewal ceremony and it is to bring Brad Pitt and Jennifer Aniston together again. This is because, for them, the ex-couple still like each other.

“Everyone is waiting to see if Brad and Jen will be seated together since there are rumors that they may reconcile,” the insider stated. “It would be so like George to put them together and he is very thrilled that they are at least friends again but he’s all for any sparks that may fly at the ceremony.”

But then Gossip Cop wrote that this story is a work of fiction. It is clearly not true for George Clooney and Amal are not even planning to renew their vows. Plus, there is no solid proof to back up the claims. Lastly, this is not the first time that the Star Magazine released a made-up report about the couple thus it is easy to see that it cannot be trusted.