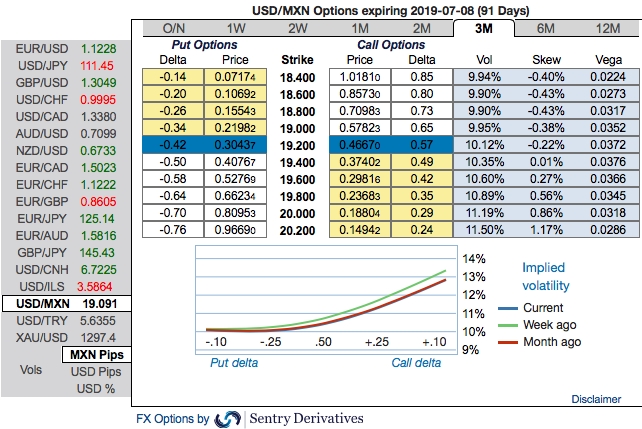 Speculations over Banxico’s rate cut are becoming increasingly louder already this year. Weak growth and, above all, the decline in inflation have fuelled such discussions. In January and February, seasonally adjusted consumer prices were unchanged compared to the previous month. The sharp rise in the minimum wage in December and the shortage of fuel in January had no negative effect on inflation. At 3.9% in February compared with the previous year, inflation was within the central bank's target corridor (2-4%) for the first time since the end of 2016.

Currently, the FX market lacks the impetus to trade the Mexican peso in one direction or the other. As a result, USDMXN has been moving more or less sideways since the beginning of the year.

External factors and domestic risks balance each other out. The external factors are providing a friendly environment for EM currencies. In particular, the prospect that the Fed is at the end of its rate hike cycle and may even cut rates next year supports EM currencies. However, due to economic and political risks, the Mexican peso can only benefit to a limited extent. Should sentiment become less favorable for EM currencies, which is quite possible due to global economic and trading risks, domestic risks should gain the upper hand and put the peso under downward pressure.

Weak growth, domestic political risks and growing concerns about the financial situation of the state-owned energy supplier and thus about a possible deterioration in public finances are likely to weigh on the peso in the coming months. But we do not expect an excessive depreciation as long as there is no external shock. Additionally, the negotiated USMCA deal should be ratified by the respective parliaments this year, which would remove a major uncertainty factor from last year.

Of late, MXN seemed to be extending recovery threatening upper bound of the recent range.