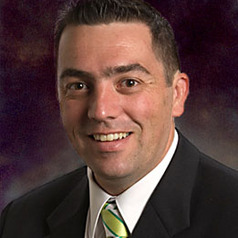 This year’s election will be the first in Australia where the parties will be advertising more on social and digital platforms than traditional media (TV, radio, newspapers and magazines).

There are a few key reasons for this. First, cost-wise, social media is far cheaper, sometimes as low as a few cents per click. Unlike heritage media, digital and social is extremely targeted, and can be done in the “dark,” so your opponents may not even be aware of the message you are pushing out.

Digital and social advertising can also be shared or even created by users themselves, further increasing the reach of a party’s messaging. This gets around the Australian Electoral Commission rules on advertising – technically they are not ads since no party is paying for them to be shared on people’s feeds.

Throw into the mix laws on political advertising – which allow parties to advertise up to and on election day on social media, but not traditional media – and we are likely seeing the first largely digitally driven election campaign in Australian political history.

Here are a few ways the parties are using advertising in the campaign so far and what makes this election unique:

What you can do with A$30 million

Among all the candidates running this year, perhaps no one has used political advertising as prolifically as Clive Palmer. This shows what money can buy.

The most recent Nielsen figures put the cost of Palmer’s ads since September at around A$30 million, though Palmer says himself he’s spent at least A$50 million. This compares to just A$16 million spent in total advertising during the last federal election, with Labor and the Coalition accounting for more than 90% of that.

From a campaign perspective, Palmer is ticking many of the right boxes: a mix of different platforms on digital and social; heritage media ads for mass market awareness featuring candidates selected from the middle; the use of memes and user-generated content; and even text messaging.

This United Australia Party ad has over 2.4 million views on YouTube thus far, making it the most viewed election ad on the platform.

Despite the ubiquity of his ads, though, Palmer is still struggling to connect with most voters. This demonstrates a very important aspect to any advertising campaign: the actual brand still needs to be seen as offering real value to voters.

The UAP has used text messaging like this one below, for example, to try to change its negative perception with voters by delivering positive campaign promises. 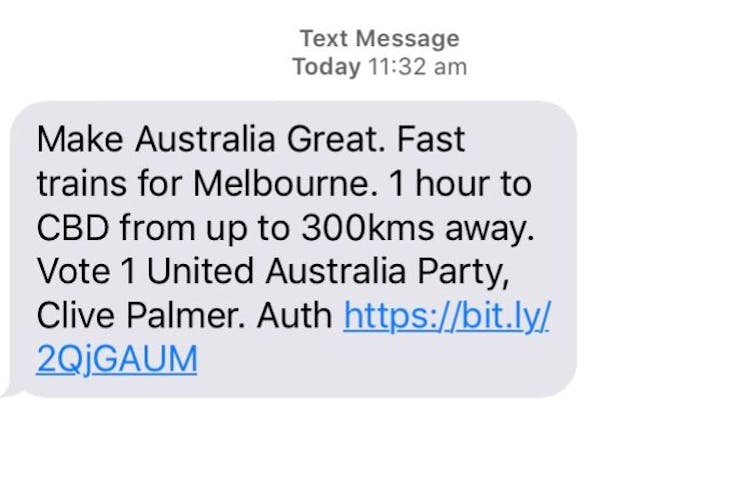 The ‘Grim Reaper’ strategy and micro-targeting

One of the most effective ads ever done in Australia was the “Grim Reaper” AIDS awareness campaign in 1987, which showed how well “scare campaigns” and negative messaging can work, given the right context and framing. The ad’s micro-messaging was another aspect that worked so well: it personalised the issue and made it tangible to anyone sexually active.

Basically, negative messaging works on the theory that what you fear, you will avoid – or the “fight or flight response”. Negative political ads highlight the level of risk and consequence of a certain party’s policies – and then emphasise how to avoid this by not voting for them.

Trouble is, most ads on TV are losing their potency. As attitudes towards political messaging and brands become increasingly negative, voters are less likely to watch ads in their entirety. Many people also don’t see them as being personally relevant.

Social media, though, provides an excellent delivery mechanism for these types of messages. Digital ads can be personalised and focused on issues that voters have already expressed an interest in and therefore find relevant to their lives. 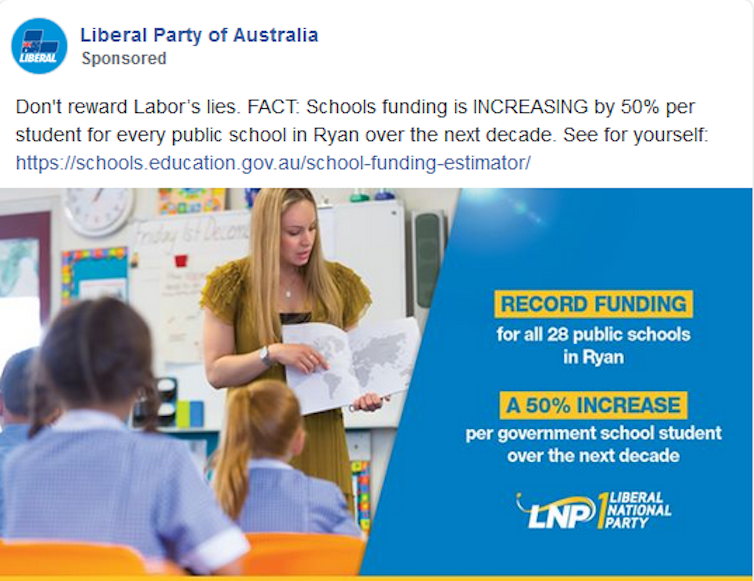 Personalised messaging from the LNP on Facebook, targeting voters in the seat of Ryan in western Brisbane. Facebook Ad Library

Social media ads can also be altered to be even more targeted as the campaign goes on, based on voter responses. And their speed of production – only taking a matter of hours to produce and place online – allows digital advertising to do what heritage no longer can and provide a more fluid, grassroots dynamic to campaigning.

This ad by Labor featuring Prime Minister Scott Morrison in bed with Palmer, for example, was released on social media within 24 hours of the preference deal struck between the Coalition and Palmer’s UAP. 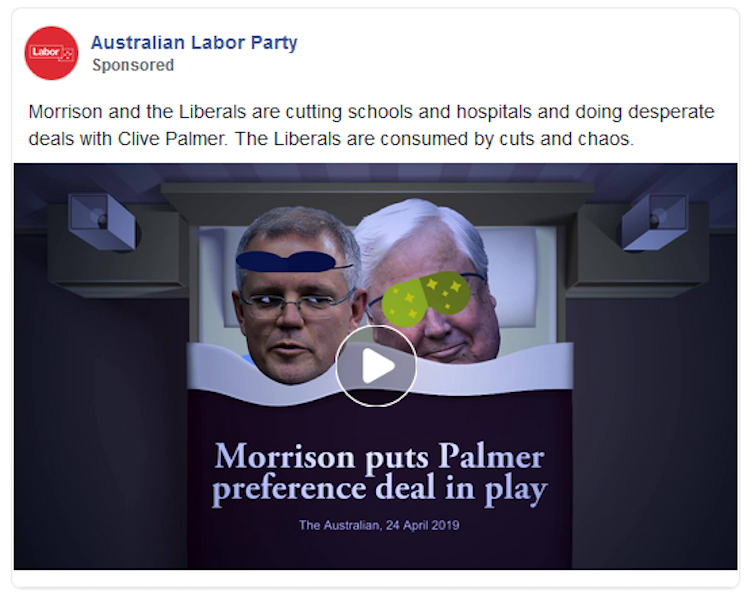 Labor’s Facebook ad depicting Scott Morrison in bed with the UAP’s Clive Palmer over their preference dealing. Facebook/Click here to watch the video

That said, even on social media, negative advertising is not as effective if it just comes from the party itself. But when combined with information from third-party sources, such as from the media, this can increase the effectiveness. For example, the Liberal Party used the 10 Network image in this ad to support its claims on Labor’s tax policies. 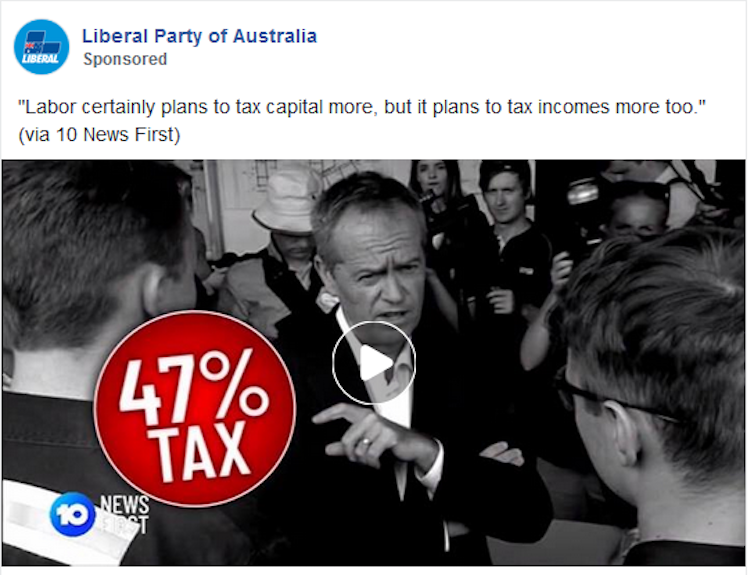 Youth voter enrolment is at an all-time high in Australia, driven, in part, by engagement and participation in the marriage equality plebiscite in 2017.

The major parties are aware of this and are creating ads specifically targeting this demographic on Snapchat, WhatsApp and Instagram. Some of these are “dark social” ads (meaning they can only be seen by the target market) or are user-made so not to be subject to disclosure rules.

For more general audiences, Labor has created ads like this one on Facebook that highlight issues young voters are concerned about, such as wage increases and penalty rates. Ads like this also attempt to engage with these voters by asking them to sign petitions – a form of experiential marketing that’s proved highly effective with young audiences, as seen through platforms such as Change.org. 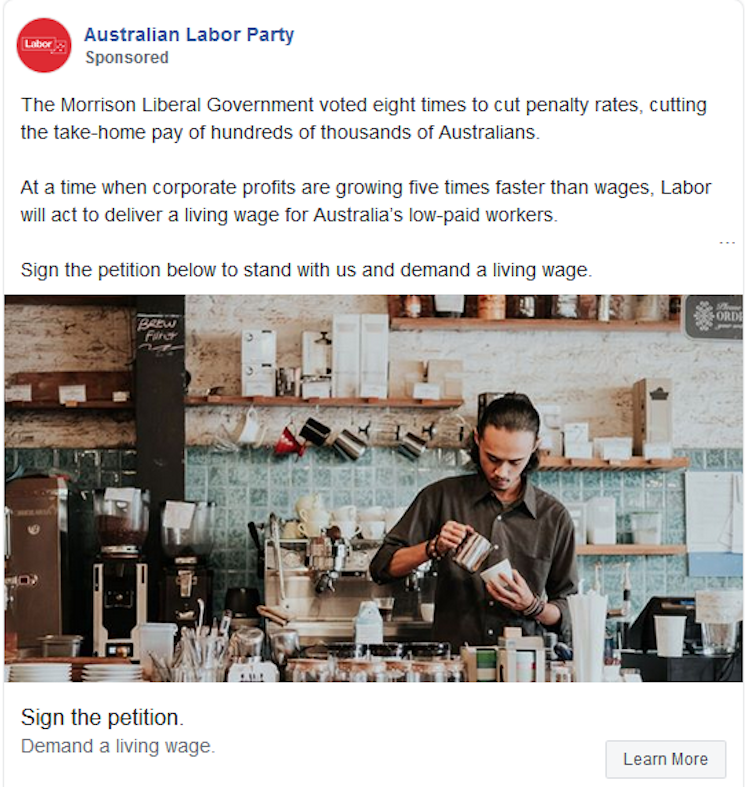 Groups like the Australian Youth Climate Coalition are tapping into experiential marketing by combining online advertising with a call for offline action on issues that appeal to young voters, such as climate change. Part-rock concert, part-protest, these events might remind some of the rallies that proved so popular during the Gough Whitlam era. 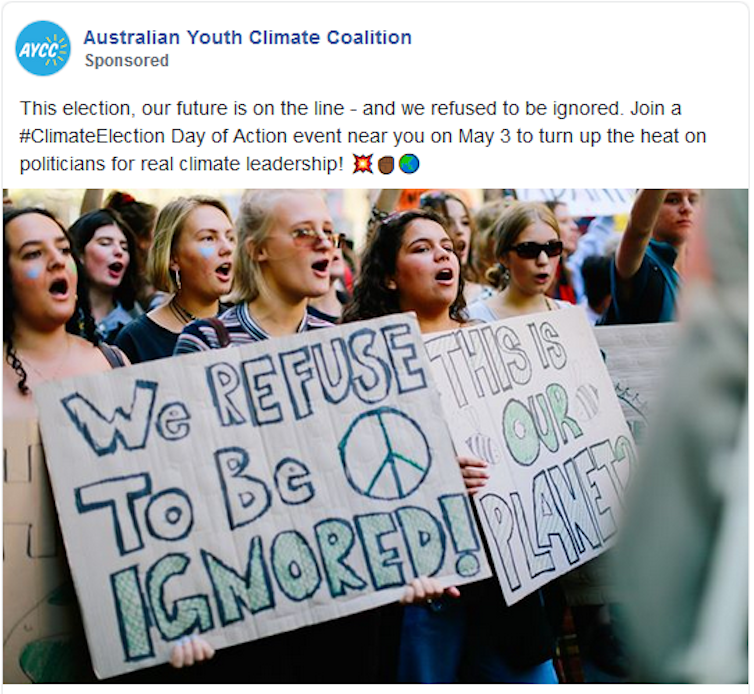 The AYCC is using a combination of online and offline strategies to engage with young voters. Facebook Ad Library

The increasing influence of lobbying groups

One of the more interesting developments of this election so far is the increasing sophistication, knowledge and strategies of political lobbying groups, or Australia’s equivalent to America’s PACs.

GetUp! is one such group, collecting A$12.8 million in donations in the last 12 months alone. Among the group’s tactics are direct phone calls to voters, partly achieved through “phone parties” where volunteers freely offer their time, phones and other resources to call people in targeted electorates. GetUp! has a goal of making 1 million phone calls in the lead-up to the election.

Other well-funded groups, such as the right-aligned Advance Australia, are also seeking to influence the narrative in the election, particularly in electorates like Warringah, where it has released ads against Tony Abbott’s challenger, Zali Steggall.

In part to counter the influence of lobbying groups, the Australian Council of Trade Unions has launched its own advertising campaign featuring working Australians describing how hard it is to make ends meet.

The ACTU’s “Change the Government, Change the Rules” campaign.